Banned Bronx billboard on the Bowery 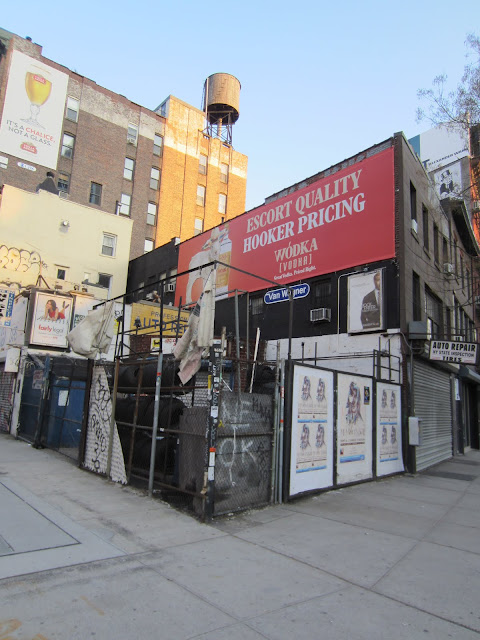 Well, it's not the same billboard here above the the Downtown Auto & Tire Center at Great Jones ... it's just the same ad for Wódka Vodka that angered Bronx community leaders after the billboard arrived over the Bruckner Expressway leading to Hunts Point, "an area still battling an image as a place to buy sex," as the Daily News reported.

After speaking with the local Community Board, the marketing company removed it last week. Per the marketing guy: "We wanted to help them out. We're going to get rid of the billboard and take it down, and we applaud them for what they're doing in their community."

Anyway, BoweryBoogie notes all this today ... and he has his own take. Meanwhile, we will be petitioning to have that "Rock Center with Brian Williams" ad below it removed ... We'll think of a reason why. 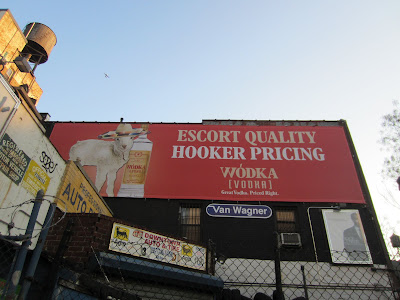 Email ThisBlogThis!Share to TwitterShare to FacebookShare to Pinterest
Labels: dumb ads, the Bowery

These billboards crack up. But what's with the lamb? Is it their mascot or some vague Lent joke?

Wait! What just happened? I didn't have to retype Gone With the Wind from cover to cover for captcha. Are the sadists at Google having a good day???

Ha! I turned off the word verification. It was getting stupiderer.

I just took a pic of the one in the Bronx the other day. I had no idea it was there - came around the corner and there it was. Cracked me up, although I was surprised it was allowed to go up at all.