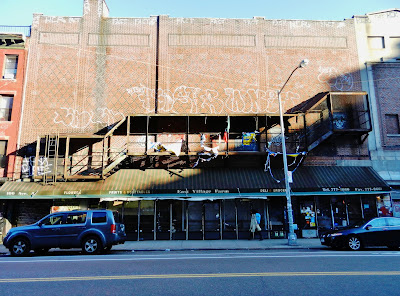 After a rather long goodbye, East Village Farms closed for good on Feb. 9. (The flower guys stuck around until last Wednesday.)

There were all sorts of rumors about this space that included a not-so-secret old movie house. The employees of East Village Farms had said the building's landlord would demolish the building.

However, there weren't any work permits to back up these claims.

But there are now.

There's a permit pending — dated today — at the DOB. According to the all-cap job description:

TO RENOVATE EXIST. HIGH TWO STORY BUILDING INCLUDING THE EXPANSION OF THE CELLAR FLOOR, THE RAISING OF THE ENTIRE SECOND FLOOR AND INSTALLING A NEW STOREFRONT. 2) TO ADD A NEW PARTIAL THIRD AND FOURTH FLOOR FOR ONE DWELLING UNIT WITH A ROOF GARDEN ON THE 2ND FLOOR ROOF ACCESSORY TO THE DWELLING UNIT.

So, no demolition. But, if approved, the landlord plans to renovate the existing building, including the storefront, and add one doozy of an apartment (3,000 square feet in total) with an outdoor space.

We'll have more on this later.

At first glance, though, this sounds like the $4.8 million "owner's triplex" above Sunny and Annie's on Sixth Street and Avenue B... 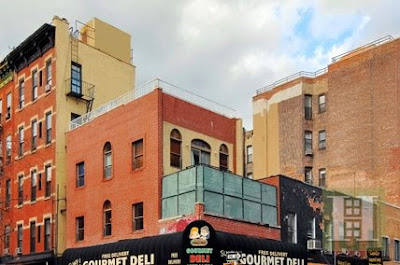 man that pad above sunny's must be awesome. john kerry sandwiches every day.

hmmmm. well at least they're not demo-ing it. i am beyond curious (scared) as to what the retail will be??

I guess it could be worse. (what am I saying?! Im sure it will be by the time it's all through)

I wonder if we can look forward to something like this -

When my brother worked for Pioneer supermarket years ago he said the screen was still there. I wonder if it still is.

I'll be waiting for you Starbucks. May the best man win . . .

Thanks for that link, Goggla. Everybody should check it out.

Does anyone know how to get in touch with the owners of this property?