So how many new 7-Eleven stores does this mean for the East Village? 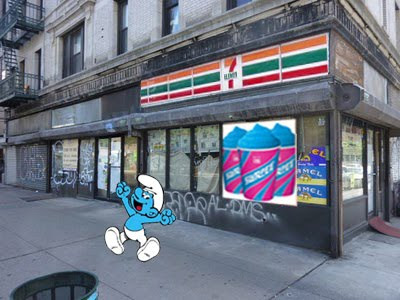 You may have seen this in Crain's yesterday ... Basically, 7-Eleven is taking over the place. There will be 14 new 7-Elevens in the city this year. Then!

They aren't ramped up already?

The company, which boasts 7,200 locations across the U.S. and a whopping 44,000 worldwide, is working toward converting many of its corporate-owned outposts to franchised outlets. In New York that also means working with existing bodega owners to persuade them to transform their businesses into 7-Elevens. Three such conversions will open here this year, Mr. Porter said. Typically it costs between $200,000 and $1 million to open a 7-Eleven franchise.

No! Don't fall for the 7-Eleven Mind Warp!

So... we have the new one on the Bowery... then, as we first reported, there's the one coming to St. Mark's Place near Second Avenue.

Given the number of new locations spawning ... expect more hereabouts. We're still speculating that one will open in the Red Square strip mall... And how about at a newly renovated 100 Avenue A?
Posted by Grieve at 2:30 PM

Email ThisBlogThis!Share to TwitterShare to FacebookShare to Pinterest
Labels: 7-Eleven, the apocalypse

That freaking smurf needs to be made into a slurpee. The one on Bowery was pretty packed last night when i walked by..

Out of curiosity, I walked in the Bowery location one Sunday morning. A handful of people inside. 3-4 European tourists. A door guy from the Bowery Hotel. And two people lurking in the back, likely killing time to get warm.

And they were also out of $1 sausage biscuits.

Twenty every year for the next five years. Dear lord. Let's hope they get concentrated in Bayside or somewhere appropriate.(Sorry, my brothers and sisters in Queens.)

I guess I am baffled why this is an issue. If it is a no name bodega or a 7-11, who cares? Or is branding of any sort an issue?

Would we be protesting Horn and Hardart in the 20s as it arrived and then again as it went away in the 70s?

7-Elevens have no character, unlike most of our local bodegas. Right off the bat, how many cats have you seen patrolling a 7-Eleven? Homogenization is the issue.

@Anonymous 3:10 PM: I think it's an issue because 7-Eleven's suck. Comparing them to a local bodega is like comparing IHOP to a local diner.

Bodegas don't smell like hot dogs. And the selections are unique.

7-11 has got character galore! I got a BIG gulp plastic cup for valentines day filled with all kinds of gifties.

Bodegas and mom-and-pop stores are being replaced by chain places such as 7-11 catering mostly to the transients and tourists.

When all of NYC becomes just like a suburb or any other U.S. city filled with chain stores -- Subway, Così, Duane Reade, 7-11, Ihop... -- if all of the country is going to have all the same thing, then what's the attraction for NYC, or what would it make any different than Fort Worth, Baltimore, Stamford, St. Louis, Indianapolis, etc.

It's about conformity and NYC becoming like Zenith in Lewis's Babbitt.

@ 3:10 PM
Anyone incapable of coherent thought would be baffled. Don't feel bad.

I look forward to an East Village where every store is exactly the same as every other store. This way, there will not be any moments of confusion, questioning, or, frankly, need to think at all. It is good that stores like this and duane reede exist to sell us only the most popular items. Like bubble gum, soda poop and beer. If it is not popular/profitable, then if we really need it we can order it over the internet and provide a data record for the State, thus serving an economic AND security function. That is why it is important to use a credit card, so they can match up your transactions with the pictures in the video surveillance.

The only time I'm happy to see the numbers 7 and 11 together is when I'm shooting dice with the guys in the basement ( Friday nights at 9pm if anybody's interested.) JUST SAY NO to corporate chain shops !

What's with all the Duane Reede bashing here? I have no problem with our successful local pharmacy chain. If you want to bash CVS, Walgreens, and 7-11, that's fine. These places offer nothing that hundreds of other stores offer at better values, owned by people who keep the money in our economy. But going after Duane Reede? We're lucky that we have a local pharmacy chain that can compete with CVS et al, at least providing us some more responsible shopping choices in the large pharmacy category.

bodegas can be amazing...like the one in front of tuitxingo or however you spell it...I never had a cold beer and hot lengua taco in the back of 7 11 while watching spanish soaps....

I've actually seen quite a few characters in the Bowery 7-11. I'm considering hanging out there Friday nights just for the free entertainment.

I watched them serve up some of that $1 pizza - they put the slice in a triangular box. I've never seen such a thing.

FYI...Duane Reade was bought out by Walgreens two years ago.