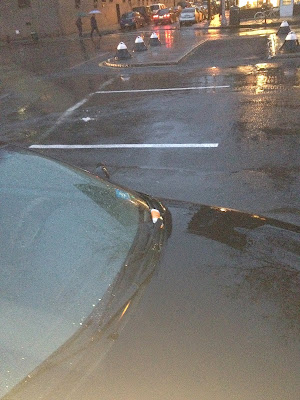 A reader notes the following on the north side of East Houston across from Ridge Street... where workers recently paved the roadway as part of the ongoing plans to widen sidewalks, enlarge medians, etc.

The reader says that the NYPD has been ticketing vehicles parked in the "crosswalk."

However! Per the reader:

Problem is there's no crosswalk lines and never has been, so these guys are getting tickets for parking in a seemingly legal and random spot. I called 311 and left a complaint ... The tickets seem like a clear cash grab and are totally bogus.

(a crosswalk has 2 definitions including one that has marked lines, but there is another. Here is the definition of an "unmarked crosswalk)

So in your case, the extension of the sidewalk is the crosswalk.

I can't tell from this photo but the rule is supposed to be you can't part past the building line and has nothing to do with painted lines in the street.

Oops that is "park" not "part" you can't park past the building line.

Regardless of whether lines are present, it's still illegal to block pedestrian ramps cut into the curb.

OK in response to the second anonymous that car with the ticket wasn't blocking any pedestrian ramp, there is actually a small pedestrian ramp right next to it.


You can somewhat see from the picture that there were makeshift lines drawn after the paving which do lead to that pedestrian ramp (they're pretty much faded away at this point). However they're ticketing cars seemingly at random.

Re: "extension of the sidewalk"

I just took a look at Google Maps for that intersection. Because Ridge St ends on the North side of Houston and there is NO traffic light at that intersection, you CAN park within that area as long as you don't block a pedestrian (handicapped) ramp.

Using the definition I posted above from the V&T law, along with a google map print of the street view of the intersection, the tickets should be dismissed.

Again, that pertains to the NORTH side of Houston.

Yes we're talking north side. Any way we can stop the ticketing in the first place instead of having to go to court to fight it?

Call 311 and file a complaint with the DOT. In theory, the DOT district office could send out a notice reminding agents about the rules regarding crosswalks, but you must understand that NYC uses parking fines as a revenue stream, employing thousands of meter maids to slap summonses on cars for any violation they find (or think they find). They aren't the most educated workforce and to expect them to understand the fine points of the parking laws isn't to be expected. Again, take a picture of the intersection and a copy of the section of the V&T when you plead not guilty. Sucks, but that's all I can suggest.

I got a ticket for parking there, in front of the "curb cut to nowhere" a couple of years ago. I was found "not guilty" and didn't have to pay the fine.

My explanation to them (along with photo documentation) was that, as shown in the photos, there were absolutely no street signs or paint
indicating any sort of crosswalk. In fact, a legal parking sign with arrows pointing both
east and west is directly next to where I parked. I was confused as to why there was a
curb cut in the middle of a very busy wide street, with absolutely no crosswalk or curb
paint and no driveway, and I was mostly confident the spot was legal due to the lack of indication otherwise and the fact
that anyone crossing at that point would be jaywalking. I found a document on the DOT website, indicating that this was in fact an issue
in the past yet “Effective December 2008, the New York City Traffic rules have been
modified to allow parking at some ‘T’ intersections, those without traffic signals or all-
way stop signs or crosswalk markings”. The document noted the exact
layout of that parking situation, further confirming that this spot was in fact legal and there
was absolutely nothing indicating otherwise.