More about Boukiés, opening next month on Second Avenue 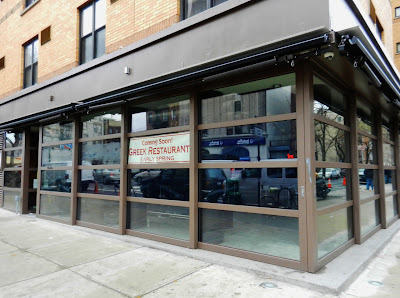 A few highlights cut-n-paste from the news release...

• Boukiés is slated to open in March.

• Boukiés will be open daily for lunch and dinner, offering brunch on weekends and expanded outdoor dining when weather permits.

Previously.
Posted by Grieve at 6:15 AM

Email ThisBlogThis!Share to TwitterShare to FacebookShare to Pinterest
Labels: Boukiés

I freakin hate this guy and shake my fist and him and his upcoming business. He helped and/or financed Ingrid from awesome (former E Village longtime tenant with insanely good fondue) restaurant Roetelle open Heartbreak, where she got a freakin' Michelin Star and then he promptly closed it w/o seeing if business would improve (it didn't seem horribly slow to begin with). For him to just open his own place in its place, yech yuck phooey.

I love Christos. I love his restaurant Pylos, a favorite neighborhood spot, and he is always charming and gracious. I wish him the best with this.

My only request: more vegetarian options!