So what's going on with the former Ben & Jerry's space on Third Avenue? 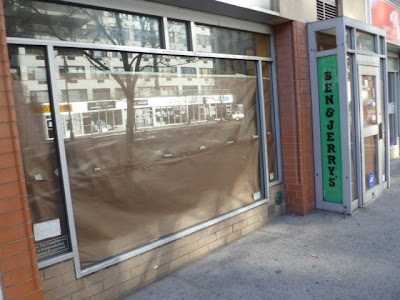 The other day, we were walking by the former Ben & Jerry's space on Third Avenue and NYU (technically 41 Third Ave.) ... such seemingly prime space has been empty for some time. Jeremiah first reported that Ben & Jerry's was closing (after 22 years at this location) in September 2010.

So nearly 18 months later... what gives here? Astronomical rent? We looked at the Newmark Knight Frank listing. Pretty specific instructions in all caps for future tenants:

The listing including this sad photo of abandoned cows... 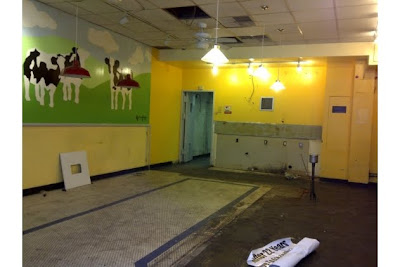 What do you think? Cellphone store? Radio Shack? Egg shop?
Posted by Grieve at 6:35 AM

Those cows must be really hungry.

Well, the old hardware store in another NYU dorm a block north of here has been empty for years.

Maybe an indoor pasture for those cows?

I miss having scoops here with my girlfriend. :(

Isn't like every other store in that building food, tea or coffee? What is the goal there?

The other tenants must have specified in their lease that no more coffee or tea spots could be allowed, noncompetitive. I miss watching the scooper shove his hand down his pants and scratch himself and then smile at me and ask how he could help just before I turned around and walked out.

My vote is for a Subway! No cooking necessary, just a bit of microwaving!

WE MUST BUILD MORE SUBWAYS!