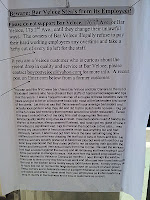 Back in January, presumably former employees of the wine cafe on Second Avenue placed flyers around the neighborhood accusing the Bar Veloce owners of allegedly underpaying workers and taking money from the tip pool.

In April 2011, Bar Veloce workers reportedly sued the owners of the restaurant group for wage and labor violations. Now, as Eater reports today, the owners are counter-suing the workers for a smear campaign that they believe is tarnishing the Veloce name.

Per Grub Street on the lawsuit, "A note to disgruntled restaurant employees: Taking out a telephone-pole flyer smear campaign may not be such a hot idea."
Posted by Grieve at 2:22 PM

Unionize and take them to the NLRB. Suing the workers is bullshit, and pure intimidation. Boycott the establishment.

Counterpunching by filing a defamation suit for statements having anything to do with the underlying allegations in the labor lawsuit is the ultimate sign of weakness. Shows the PR strategy is working. I for one will never go there again because of this BS countersuit.

This is why litigation is sometimes referred to as "the sport of kings". Rich people filing a counter-suit against workers who can't afford to hire a lawyer to defend themselves (most likely the lawyer they have now is working on a contingency fee basis and won't defend the defamation suit for free) knowing they'll never win the defamation suit but that it'll cost the workers cash to defend = scumbag bullying. Truth is a defense to defamation, so if the workers win or settle their lawsuit this case will disappear anyway.

they settle this BS countersuit and i'll happily keep posting the flyers anonymously.

Yup, as I wrote the first time around:

Anonymous said...
Whoever is involved in this better have money to pay their lawyers' fees when Bar Veloce sues for libel and defamation.

It was only a matter of time. The former employees are screwed unless a judge throws it all out.

Maybe I'm just naive with regard to the legal process, but I'd like to think that any individual armed with the truth should be free to voice it publicly. All I know is that this guy must be pretty sure about his claim because I spotted a ton more of those fliers on my way to work this morning in the village. Whatever the case may be, I can't help but be inspired by his dedication. Don't know if I would have pursued something as diligently unless truly stolen from.

Bar Veloce has been going down hill for the past couple years. The same reason the place next door they owned closed. There are so many better options to chose from in the east village why would anyone go there anymore anyways. The fact they are involved in a lawsuit suing their own employees might just be the final nail for that place. Happy Trails Veloce

"Rich people filing a counter-suit against workers who can't afford to hire a lawyer to defend themselves (most likely the lawyer they have now is working on a contingency fee basis and won't defend the defamation suit for free) knowing they'll never win the defamation suit but that it'll cost the workers cash to defend = scumbag bullying. "

Filing a counter-suit, is, by its very nature, a defensive tactic. It's not bullying--it's reacting to the activities of these employees. Employers have the right to protect their business interests, too.

I'm all for employee rights, don't get me wrong, but it's not fair to fault an employer for trying to protect his name and his business.

Before damning him to hell, we should wait for the results of the lawsuit the employees filed in the first place.

By the amount of fliers I saw posted tonight around 2nd Ave below 14th street, pretty sure this case has yet to be resolved. Glad to see some people still have enough conviction and guts to stand up against what they feel to be unjust practices... seems like that mentality has been dormant for decades. I for one will not be sipping any vino at Bar Veloce anytime soon.

I've never been to Bar Veloce and I can't comment on the truth or untruth of this guy's claims, but may I be the first to point out that the flyers read like they were written by a raving lunatic?