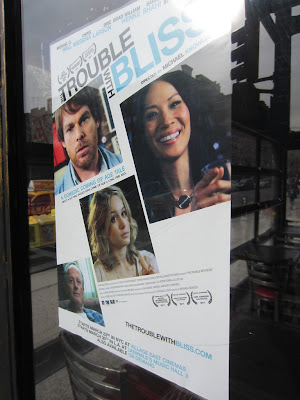 We spotted this poster on First Avenue this morning... We're glad to see that "The Trouble With Bliss" has a release date — March 23 at the Village East Cinemas on Second Avenue.

The movie is based on the novel "East Fifth Bliss" written by former East Village resident Douglas Light, who lived at 343 E. Fifth St. for several years.

Michael C. Hall plays thirtysomething Morris Bliss who "watches as his life comically unravels after he enters into a relationship with the daughter of a former high school classmate." The movie co-stars Lucy Liu, Brie Larson, Peter Fonda and, we hope, Slum Goddess, who served as an extra in scene filmed at the Blue and Gold.

We pointed out some of the filming around here back in the spring of 2010... in Tompkins Square Park, Seventh Street, 13th Street, among other locations...

There's a "Trouble With Bliss" Tumblr here with more photos and info...

And we'll have more later on all this...

Q-and-A with 'East Fifth Bliss' author Douglas Light
Posted by Grieve at 11:48 AM

Finally, the story of a white man's mid-life crisis and some sex scenes with someone young enough to be his daughter. Sounds real unique.

@ Mary Ha ha! that's a good one. Also, any film shot around here that doesn't have to do with the death of the East Village and Lower East Side is a loss for us. Particularly if it's straight realism with street scenes. I don't give a shit whose shooting it.