The next dessert concept for St. Mark's Place: bacon-filled macarons 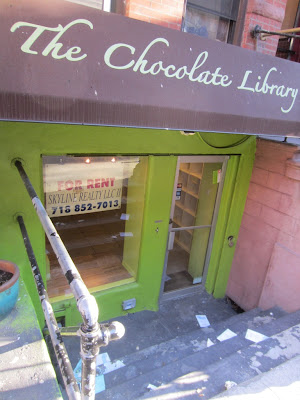 So, we have places selling sweet buns and pudding on St. Mark's Place between Avenue A and First Avenue... and now?

As Julie Shapiro reports at DNAinfo this morning, Macaron Parlour is taking over the vacant storefronts at 111 St. Mark's Place, part of the former Chocolate Library.

The desserts debuted at the Hester Street Fair in 2010... this will be the first shop for Christina Ha and Simon Tung. Per DNA:

For every lemon macaron sold, Macaron Parlor donates $1 to Alex's Lemonade Stand, an organization that seeks to cure pediatric cancer.

These were two of the storefronts that we suggested Bleecker Bob's look at for their relocation.
Posted by Grieve at 9:19 AM

Ironic since sugar feeds cancer. When I was diagnosed a few years ago my doctors didn't want me anywhere near sugar, alcohol or red meat.

oh give me a break already

As I eat my bacon pizza at Ninos off Tompkins I always say - you can't go wrong with bacon. I guess I was wrong.

Didn't they forget a whiskey macaron? You can't have traditional baked goods in the new East Village unless they are now syrupy fat-bombs laden with booze and bacon.

If anyone needs me, I'll be at DeRobertis.

to clarify: glad they are doing something for charity but a macaroon shop is just not very useful for residents.
we're really getty pretty overwhelmend by specialty dessert shops.

Macarons are the new cupcakes, I hear. Surprised nobody's tried pulling this before now.

Maple cream cheese sounds like a winner to me - the bacon is a bit much, for me like hot pepper in chocolate. Somethings just don't go together. Unfortunately my selfdiagnosed hypoglycemia prevents me from enjoying much sweet stuff whaaaah