On Wednesday night, the fellows behind the plan to build a park in an abandoned trolley station below Delancey Street (the Low Line or the Delancey Underground) launched a Kickstarter campaign.

Their goal is to raise to raise $100,000 to fund a large-scale demo of technology they developed to transport sunlight underground, as The Lo-Down noted. (You can find the Kickstarter page here.)

There's a video explaining all the particulars on the Kickstarter page...

Several people have pointed out one moment in the video... at the 25-second mark ... the line about the Lower East Side being "full of culture and history ..." is set to an image of the now-demolished Mars Bar... 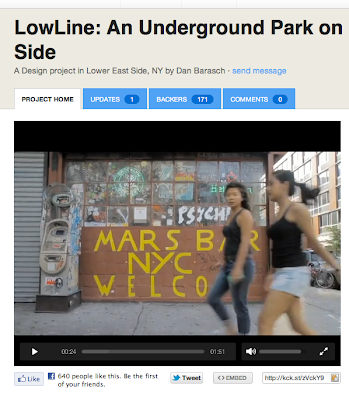 Previously on EV Grieve:
Day trippers: Picture yourself in a park under Delancey
Posted by Grieve at 6:30 AM

Will they go through our backpacks like they do when we go to governor's island? Will this provide a security function as well as a recreatuonal function?

This is pretty cool, I am going to check out the kickstarter this weekend. Cool idea

who knew there that much empty space there? is there more about the trolley barns?

the idea is not so odd - montreal has a second downtown that is underground.