The Third Man has closed on Avenue C 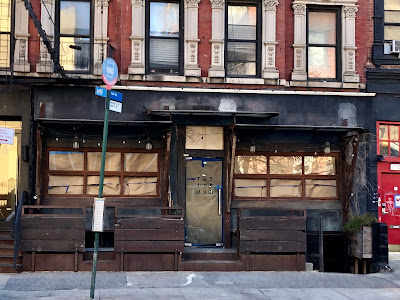 Paper now covers the front door and windows at the Third Man, the cocktail bar at 116 Avenue C that shut down at the beginning of the month.

There isn't any official notice of a closing on the Third Man's website or social media properties. Google and Yelp list the space between Seventh Street and Eighth Street as permanently closed. (Several Instagram users noted the bar's last day was Feb. 1.)

This closure doesn't come as a surprise. Owners Eduard "Edi" Frauneder and Wolfgang "the Wolf" Ban also operated Edi & the Wolf on the next block. That Austrian restaurant closed last April due to "increasing operating costs."

The Third Man, with an early-20th-century-Vienna–theme (and a nod to the classic film), opened in December 2012.
Posted by Grieve at 4:14 AM

Email ThisBlogThis!Share to TwitterShare to FacebookShare to Pinterest
Labels: closings 2020, The Third Man

Still miss Edi and the Wolf. Both it and Zum Schneider had, aside from delicious food, some really intriguing European interiors, and now both are closed. I have no doubt that whatever goes into the Schneider space will "sanitize" it into blandness so as not to offend; that's exactly what happened in that dark, woody, Edi space.

Sad about this one... I was a big fan. Great bartenders, music and space.

Damn, this place was the best in the summertime. Too bad!