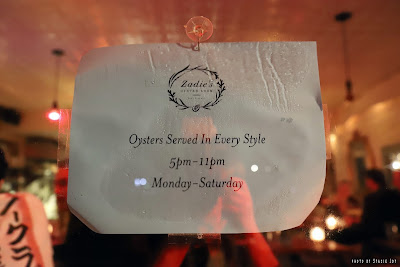 The wine bar-restaurant at 413 E. 12th St. between Avenue A and First Avenue drew inspiration from NYC's oyster houses from the late 19th century.

EVG contributor Stacie Joy stopped by Zadie's last night. Chef-owner Marco Canora, who also runs the nearby Hearth (opened 2003) and Brodo, said that he had no choice but to close the doors ... and expressed regret that a place like Zadie's couldn't draw bigger crowds on a consistent basis with its reasonably priced menu and neighborhood-y crowd. (We heard rumors earlier in the month that Zadie's was closing after the departure of Chef Mike Campanile.) 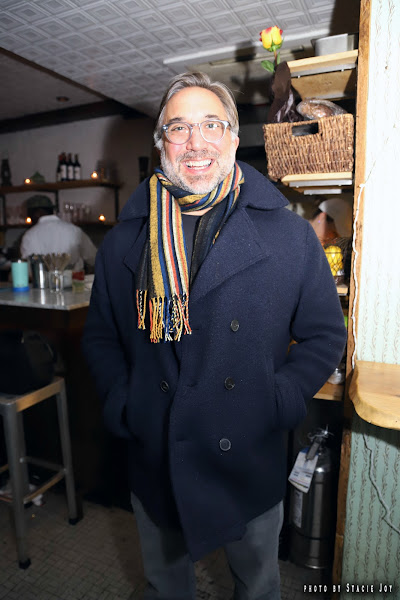 Zadie's opened in June 2016. He was previously involved with the wine bars Terroir and Fifty Paces at the address.

Now, though Canora says that he doesn't haven't any plans to open a new venture here, and is giving up the space.

Stacie reports that the crowd last evening was festive, with Zadie fans celebrating the space rather than mourning its departure... 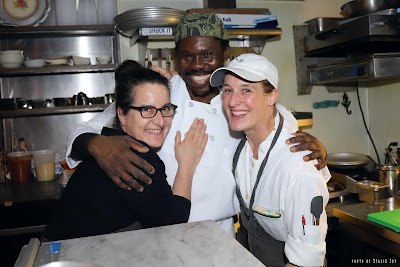 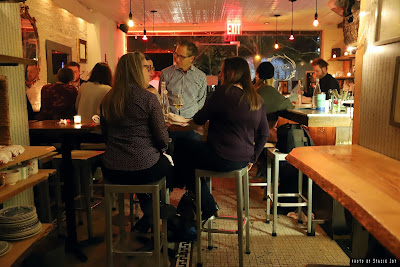 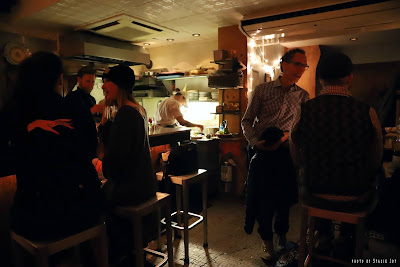 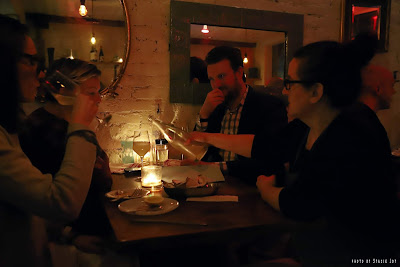 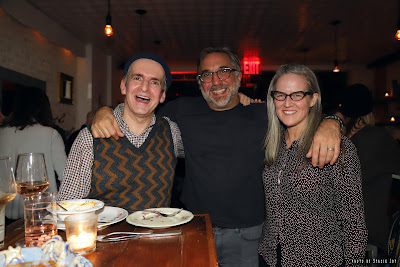 Previously on EV Grieve:
A visit to Zadie's Oyster Room on 12th Street
Posted by Grieve at 6:00 AM

Good, there isn’t a ramen spot on that street yet. Hopefully we can get one in by the end of the year!

Dammit! This was a great little place!

This sucks. So many beloved, small businesses like this can no longer survive. It's really sad. How do you subsist now in the face of higher labor, rents, product costs, and insurance? Unless you are wealthy, I don't understand how anyone can commit to owning a restaurant long term in today's culture and economy, especially in neighborhoods such as the EV and the WV. Too bad. This was a sweet place.

There are real world consequences to increases in minimum wages, tolls, taxes, giving employees paid sick leave, family leave, etc. People will only pay so much for a burger, coffee, ham/egg etc. If you support all these progressive policies then you need to support them at the local shops that have to raise prices to keep up. Too many people support these ideas and then buy all their crap online and then wonder why all these stores are closing.

Anon 12:39 you are absolutely correct, support local businesses and not Amazon!

I'm very sad to see them go, they were a great spot with a superlative staff.

But, this is just how the restaurant business works people. An oyster restaurant is a tough sell for a pretty large portion of the population. Most restaurants close within the 1st year, this one lasted 4 years. I'm sad Mr. Canora isn't going to put in another concept though. He's a legend, I love his restaurants universally.

This might have been affordable for some people but not for me. I would love to see an affordable restaurant take over this space but I don't think anyone can make money serving affordable food.

Zadie's was a diamond in the rough world of pizza, ramen and bistro blech. Hats off to Chef Mike for elevating the concept. Marco's Zadie's Oyster Room supported many local farmers and Billion Oyster Project. THX

Yeah. I was there on Thursday. Tweeted to you as soon as I heard about the closing a few weeks ago. I was there consistently almost every day for the past year. Went before that but not as much. Definitely celebrated last night. It’s a shame that it had to be crowded every single night in order for the Chef to feel like it was worth it. Money makes the world go around.