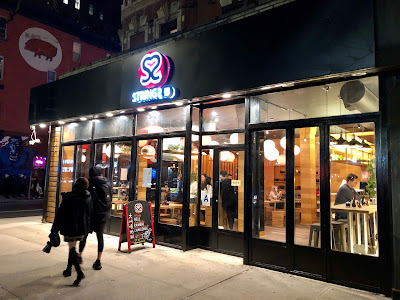 Strings Ramen is up and running at 188 Second Ave. at 12th Street.

This is the fifth outpost for Strings Ramen, a regular on the best-of ramen lists in its home turf of Chicago and the United States. (There's also a location in Madison, Wisconsin.)

Among other dining options, Strings features the Monster Hell Ramen Challenge, an extreme dare in which participants have to sign a waiver before attempting. Here's one write-up of it:

[The challenege] involves eating an entire bowl of level five spicy ramen in 20 minutes or less without leaving the table or guzzling more than the measly single allotted glass of water. It’s not hard to understand why: The level five Hell Ramen is fueled by no fewer than five different kinds of peppers, including ghost (which you’ve heard of) and scorpion (which you probably haven’t – it’s from Trinidad, and has been listed among the world’s hottest). The fact that the peppers infuse the broth, which soaks deeply into the bowl’s other ingredients, makes the heat completely impossible to dodge. And after your second or third bite, your tongue is essentially immersed in a spice-spiked lake of fire.

"Winners" receive a $50 gift certificate and a Monster Hell t-shirt... oh and the bowl is free.

Perhaps Strings Ramen will be able to make this space work. As previously noted, the restaurants at 188 Second Ave. haven't fared well in recent years (at least since old-timer Shima got rent-hiked out of here in January 2014). Lumos Kitchen lasted three months in 2018. Others to make quick departures in the past five years were Hot Pot Central, DumplingGuo and Dumpling Go.
Posted by Grieve at 4:18 AM

I dunno, do I not just get it an do people really ENJOY eating food so hot that after they're done Engine 5 has to show up and douse the linings of their mouths to put out the flames?

Not thrilled about "Man Vs. Food" shit coming to our neighborhood. Luckily that space is cursed since Shima left.

Not optimistic about the longevity of this place, since their menu is printed in a way that's nearly un-readable (small red lettering on black background), AND they emphasize that ordinary ramen orders should be fully consumed in about 10 minutes ... don't dawdle. And I guess then you can leave.

It doesn't sound like a place to meet your friends for a relaxed dinner. Seems like it's pitched to the bro crowd.

Don't like the "Man vs. Food" shit coming to your neighborhood? Then don't fucking eat it!

We've had brick lane around here for ages... and their "challenge" food is literal torture if you are stupid enough to try it.

I'm just happy to have more ramen spots. I love me some ramen.

Hmmm... seems like a challenging location for sure, but with any venture, I wish them luck and want to see them succeed. Maybe move back one space for dumb, "competitive" eating — when there are hungry people in the world, be humble, serve good food, and honor your customer. Isn't that enough?

I irrationally hate the name Strings Ramen. I don't associate the word "string" with a thing that is tasty. The name makes me think of that time my cat ate a ribbon.

Good there weren't any other ramen spots within a block, which has left so many people starving to death.