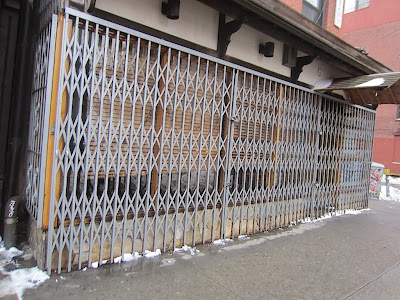 On Friday, we noted that several readers had expressed concern over Sapporo East. The 30-year-old Japanese restaurant on East 10th Street and First Avenue has been closed the past week or so, and there isn't any sign noting a vacation or closure on the front door.

This past weekend, a very reliable source told us that Sapporo East has closed for good.

Meanwhile, in a double whammy, we understand that Shima, another sushi old-timer on Second Avenue at East 12th Street, has also closed. 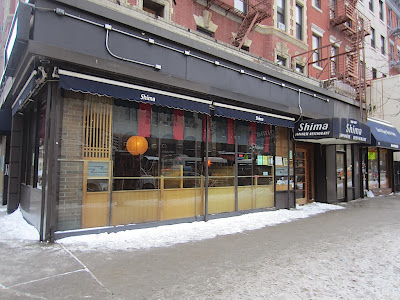 Several readers noted this as well over the weekend; calls to the restaurant go unanswered. Shima opened on Waverly Place in the early 1980s, but was priced out by NYU… arriving at its current location in the late 1990s. Sapporo East and Shima share the same ownership. It's unclear if Shima will reopen in its current form.

In September 2012, Robert Sietsema at the Voice wrote about Sapporo East, which was the oldest existing Japanese restaurant in the East Village … opening in 1983.

And then along came Sapporo East. Even the facade looked jazzy and Japanese-y, and the interior, with its bobble-headed white waving cat — the first one we'd ever seen — set the standard for dozens of restaurants to follow. In fact, Sapporo East was an early harbinger of Little Tokyo, the city of young Japanese expats that lies within the East Village, and includes sake bars, grocery stores, pastry shops, hair salons, ramen parlors, sushi spots, and dozens of other institutions centering on 9th Street but spreading for blocks in several directions.

As Sapporo East has looked on and become something of the gray lady of neighborhood, the fantastically low prices have remained.

Arrrggh. I lived on that block '89-'91 and had sushi for the first time at Sapporo.

Oh no. I loved both of these places, though I was going to Shima more lately. Any additional info you can get would be appreciated. I am so sad to hear this. I loved going to Shima because the food was good, the service was excellent, and it was a nice, quiet spot to enjoy a meal with a friend or alone. I can't believe it is gone.

NOOOOOOO!! I just ate at Shima a few weeks ago!

(And I did *not* know they were owned by the same people. I found the food at Shima consistently far better than Sapporo East.)

My two go to places. Oh that sucks.

This is really bad news.

I guess the EV arriviste hipster "foodies" have turned their noses up at sushi.

In other possible news of a possible closing...this one related to the Dollar Slice Pizza War...without fully paying attention, it seems like, however, when I've walked past the dollar slice place (next to Vinny's on 1st Ave between 13 & 14) that's it's been closed with the roll-gate down.

Still go to Shima regularly but was never the same after Chef Toshio Oguma left in 2006. For any who remember his unique presence behind the bar and winning ways with fish, he has recently opened an omakase-only ten seat space on the UES you can find reports on by googling his name.

I hate sushi and dont eat it, but those 2 places were part of the furniture of the neighborhood. The corner of 10th & 1st was an institution. Sad, sad, sad! Hey landlords, we know that you have your bottom line but it is becoming nearly impossible to have any kind of small business in the East Village anymore.

at least we still have biscuits

is it me or is this beloved ev changing at hyper speed thanks to bshaoul and jkushner et al adroitly changing the overall tenancy ?

I assume this has something to do with the opening of Kotabuki, which has been packed since they opened. Kotabuki has terrible decor and an awful crowd, but the sushi is certainly fresher than Shima.

I've lived on 10th and 11ths st. for over 30 years. My favorite places have closed over the years, but I still do find a few new ones. This closing really hurts. It's like I have lost an old friend.

Noooo, It was my favorite neighborhood go to place for sushi for over 15 years, Just ate there 2 weeks ago. The nicest staff, quiet, quality food, comfortable, good service, I will so miss it. Keep us updated please

Both those sushi places have the same owner who decided to retire back home (Japan). I often eat there and by coincidence dropped by Sapporo East on their last night, the waitress told me it was so. Unfortunately the employees only found out about the closure only two days prior !!!
There is a good chance that someone else may take over the place.Let's hope so.

I don't understand. Sapporo was never not busy. Sounds fishy to me.

Sapporo was my first sushi. went there for first time just shortly after they opened.

Noooooo! I use to see Allen Ginsberg going in there, eating alone, and knowing all was right with the world.

I wish someone who worked at Shima or Sapporo East would see this post and share some information. I am so sad about the closing of both of these restaurants. They both appeared to be as popular as ever. It isn't the same landlord for both buildings, is it? Does anyone know?

If it was a matter of the owner choosing to retire, it is likely the closings would have been preceded with some notice and a goodbye to long-term customers.

Of all the types of venues to close a sushi restaurant (2!) would be one of the last that I would guess, especially given their current "trendiness."

I wish I had known Shima was closing so I could have stopped in to say goodbye to the people who worked there and find out what's next for them. I hate when a restaurant closes suddenly, and there is no goodbye!

That the owner would retire to Japan or whatever after 30 years in business makes sense. But just shuttering up the place and leaving doesn't. Wouldn't he want to sell his business (like the owners of John's did)?

The sushification of the East Village continues.

According to DNAInfo, Robataya on E. 9th St. has just been bought by international sushi syndicate OOTOYA. The company in publicly traded in Japan owns over 70 restaurants in Asia and also has one in Chelsea and another in Times Square. Now they are entering the rich sushi trade of the East Village. Could they also be behind the closure of Sapporo and other local sushi restaurants in an attempt to further monopolize the downtown sushi trade? OOTOYA purchased Robataya from Bon Yagi, who himself owns 10 local sushi restaurants, eight of them located on the Little Japan corridors of east 9th and 10th Streets.

Who knew that the East Village sushi business was controlled by just a few sushi barons intent on squeezing the last dollar out of every ounce of raw tuna, octopus and eel served south of 14th Street? Who knew all these "local" sushi joints were basically just pawns on thier way to becoming the McDonalds versions of global sushification? With competition like this the locals don't stand a chance. Again.

EAST VILLAGE — An international Japanese restaurant chain has snapped up the locally-owned East Village eatery Robataya, according to documents filed with Community Board 3.

OOTOYA, a global chain that already has outposts in Chelsea and Midtown, has taken over Robataya at 231 E. 9th St. between Second and Third avenues, which it plans to continue operating under the same name, according to liquor license documents posted online.

Nobuhito Tanaka, who runs OOTOYA's American operations, bought Robataya from owner Bon Yagi, an East Village restaurateur who has 10 other eateries in the area.

Yagi's East Village-based company T.I.C. Group is also an authorized dealer of TOTO, a Japanese brand of toilets that double as bidets and can be operated by remote control.

Such sad news. I have been eating at Shima since 1978 when it was on Waverly Place. Back then the Sushi chef was Saito. His assistant was Mamoro. Both of these men would assuage your hunger with the culinary delights of Japan in an artistic and bountiful manner. Eventually Saito returned to Japan and Momoru became head Sushi chef until he left to start his own restaurant, Marumi, with two partners in 1993. You can still eat at Marumi on LaGuardia Place and find the same great quality, style and affordability. Be prepared to wait on line for this great place.
It is sad to see Shima go out though. I will miss it along with other great small restuarants of the East Village that have vanished in the last few decades such as: Bini-Bon; Kiev; Siam Square; Bamboo House; White Wave; JLOB and so many others.
We wish Yagi all the best and thanks for the good food.

Hey Giovanni first of all get your facts straight. Bon Yagi does not own "10 sushi restaurants" in the East Village. You need to reconcile with yourself this basic concept: sushi is one very specific kind of Japanese food. "Sushi" is not a catchall term for Japanese food any more than "macaroni and cheese" is for American food.

That said, for anyone who cares about the distinction Bon Yagi's places represent the polar opposite of what most Americans consider Japanese dining--authentic stuff that's not found in the usual played-out "sushi bar restaurant" template. Curry, shabu-shabu, ramen (way, way, way before it became a NYC fad), robataya, takoyaki. There's also a teahouse and a sake bar.

In any case these places are beloved. Some are neighborhood institutions. Mr. Yagi is a true local who has been slinging hash in the EV for over thirty years. You got some nerve trying to characterize the guy as some kind of johnny-come-lately opportunist.

Who cares? It's all sushi to me too.

Dangit. Sapporo acted as a surrogate after "Go" on St Mark's closed down. Where am I gonna go now for my no-frills bento box and sushi dinners??? Bullshit!