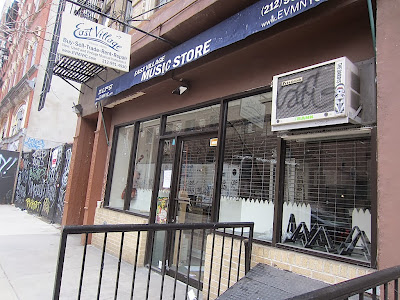 The East Village Music Store at 21 E. Third St. closed for business at the end of December.

Claude Campbell, who opened the shop in 1994, told us earlier in December that he hoped to find a new storefront. There's no word on that status right now.

Meanwhile, the space is now for rent. According to the Massey Knakal listing:

Wide, side street space on the same block as the Bowery Hotel and its acclaimed restaurant Gemma.

Other Neighboring tenants include Bank of America, The Standard Hotel, B Bar & Grill, Phebe’s Tavern, PiccolaStrada.

The rent is available "upon request."

On Jan. 9, the marshal took possession of the space on behalf of the landlord, Cooper Square Mutual Housing Association. 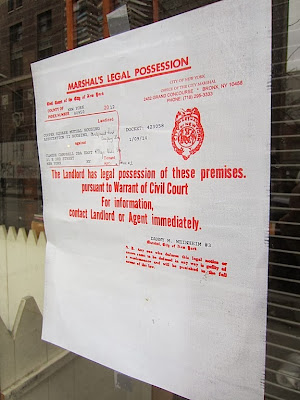 Previously on EV Grieve:
The day the music stores died in the East Village
Posted by Grieve at 5:11 AM

Perfect spot for froyo in a hoof or another frat bar or artisanal foodie joint.

Massey forgot to mention located next to a lot that holds Cooper Squares garbage containers and all the traffic on the street from the Project Renewal clients.

Does anyone know how I can contact the owner, Claude? I was about to buy a keyboard for my brother-in-law right before the snow started falling, and when I came back on a relatively snow-free day the store was closed and that notice was up. I'd really like to buy that keyboard for my sister's husband...