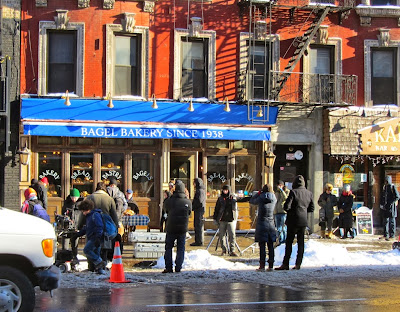 Some residents along Second Avenue woke up early today to the view of Bagel Bakery — "since 1938." Just temporary, of course, while a film crew converts the space that belongs to Local 92, the hummus bar at 92 Second Ave. between East Fifth Street and East Sixth Street...

We didn't catch what the crews were filming here... photo by peter radley.
Posted by Grieve at 3:52 PM

If waking up at 1pm in the afternoon is an EV thing, I'm all in!

How about the lazy/inconsiderate shop owners who don't shovel their sidewalks?Saw two on East 2nd Street and Avenue B with shovels and rocksalt in the shop??

We could use a bagel shop in this neighborhood.

"How about the lazy/inconsiderate shop owners who don't shovel their sidewalks?Saw two on East 2nd Street and Avenue B with shovels and rocksalt in the shop??"

is that the name of the movie? if so, count me in!

"We could use a bagel shop in this neighborhood." WTF?

I went into the 7-11 on 11th and A tonight and told the two clueless bimbos working behind the counter that they needed to call someone higher-up and get their sidewalks shoveled; they were the only business that still had snow-covered walkways. They didn't shovel during the last storm, either.

Tom, I missed the 1pm reference.

A friend of mine posted this to my FB page:

Unkle, we* stopped at TS** Sunday for a drink after a movie...too loud~! oh yes we are getting old...went to something 92 next to The Cabin...drinks and humus cost 90$ sheesh~!2 drinks each and some humus...really?

The sign didn't go up until latter in the day

"Since 1938" - says who? Since somebody in the owner's family started to make bread? That whole 'time-tested' salute is becoming meaningless.

Dude! Dude, it's make believe. Due to the lack of support a Hummus Bar will be moving in next.

my grandfather used to take me there when i was a kid - best bagel with a schmear ever!