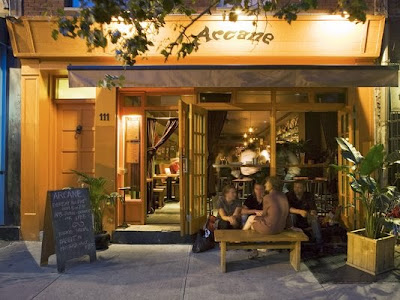 A reader told us that Arcane is closing on Avenue C between East Seventh Street and East Eighth Street. However, it sounds as if the folks at the French-Caribbean restaurant have some new plans. Here's the message on the Arcane Facebook page:

Following five and a half years of nostalgic memories at Arcane, we now inform you that we are coming to a close. We continue to struggle financially at Arcane, and unfortunately, we are no longer a profitable pursuit.

However, we have recently committed to embracing a new concept and are immediately putting effort forth toward creating a more expansive business. In approximately one month from now, we are planning to open a french cambodian restaurant called, "Cafe Cambodge". On Sunday, January 26th between 4pm-7pm, we will be hosting a party to help raise the required capital to launch the construction, we will be selling pre paid vouchers for redeemable dinner.

We are sending out immense gratitude to all, for the continued support and loyalty to Arcane, and we hope to see you accompany us on the 26th as we embark upon this exciting new beginning. We will be also raising funds on the Internet via gofundme.

If you are interested, then here are the details via GoFundMe.

On Oct. 24, 2012, the body of Christine Ebel, who owned Arcane with her brother Benjamin Alter, was discovered in the empty lot adjacent to the restaurant. Ebel, who was 52, lived above Arcane and reportedly fell off her balcony.

Email ThisBlogThis!Share to TwitterShare to FacebookShare to Pinterest
Labels: Arcane

Was there any follow-up on Ms Ebel's death? At the time, it sounded fishy...then Sandy came along and, I assume, wiped out all evidence of what happened.

This new situation sounds a little odd, too. They are no longer a profitable restaurant, but are rebirthing themselves as another restaurant? And crowd-funding to do so? Okaaay.

Maybe it's a bankrupcy thing with Arcane and new concept has a new partner? Liked arcane, will miss the Steak.

I agree with anonymous 1:39. Ben is a really great guy and I will miss the steak as well. Perhaps it will be a secret dish available to those who ask. Fingers crossed.

These people really need some help with the naming of their restaurants.