Here is the next new section of East 14th Street

As you probably know, a new retail-housing development will take the place of eight single-level storefronts on East 14th Street between Avenue A and Avenue B. We first saw the conceptual rendering for 500 East 14th St. at Avenue A (below) back in November. 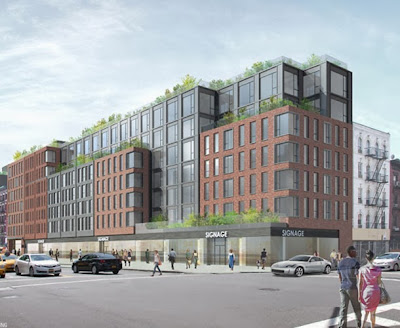 Yes, there is more!

Yesterday, the RKF retail listing went live for the second part of this new development — 524 E. 14th St. ... and here is the conceptual rendering for this property, which will also have a loading dock on East 13th Street ... 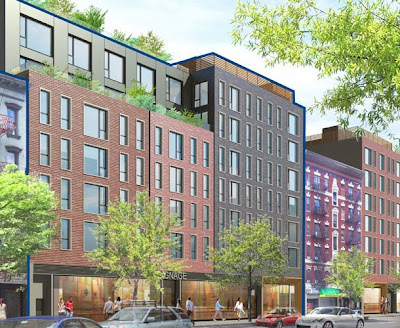 This is the space last held by ABC Animal Hospital (now at 200 Avenue A), Petland and Bargain Express. 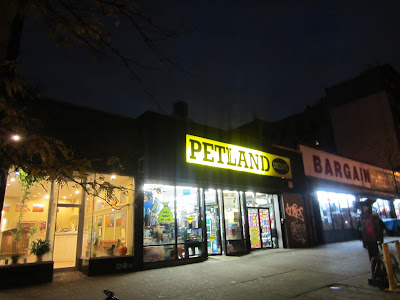 The stated retail possession for the storefronts is early 2016. The city OK'd the demolition permits for the space last week.

520 E. 14th St., which houses Dunkin' Donuts on the ground floor, is the lone holdout between the new buildings. 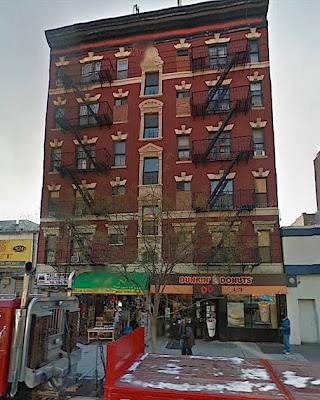 Here is the future of East 14th Street and Avenue A: 7 stories of residential and retail

City OKs permits to demolish the empty storefronts along this section of East 14th Street
Posted by Grieve at 5:30 AM

I feel bad for the tenants in the building that's going to remain once construction starts.

I love that the one building is staying. The developers better not get one fuckin scratch on it! Stay strong!

Anyone that walked down this block in recent years had to realize the series of one story buildings were built as placeholders for future buildings. These new buildings are somewhat respectful of existing building heights (Sty Town) and the corner building on Ave A. We are lucky this is not a series of towers made of glass and steel which may someday happen on the corner of Ave D. The downside of these buildings will be the over crowding of the L train station at 1st Ave. Remember this could have been much worse.

Looking at the new rendering, my immediate reaction was, "well that one building looks kind of like the east village." I forgot that this development was swallowing one lone building with old new york city charm.

One thing I am curious about is what explains the lack of fire escapes on newer buildings? Is it just that they have fire doors and are more resilient etc.? There's something comforting about having a fire escape, but I guess if I had a crazy roof deck I might not think that.

It'd be so great if as part of this development, the city could construct subway openings at the intersections of 14th St and Avenue A for the L, which is already past saturation at rush hours.

Was the coolest section in the entire EV. Fuck this shit.

There are zoning restrictions that apply in this case to restrict buildings' height.

Fire escapes are not allowed on new building in NYC. Interior exit stairways are how they do it now. They're enclosed with fire barriers.

That there isn't a stair to the L train station at Ave A makes no transportation planning sense. The one time costs of dropping staircases on the north side of the street with card access turnstiles is well spent public money.

Write these folks and tell them:

It would be nice if the Associated could move in to a new space on the ground floor. The current store is way too small for the number of customers.

Yeah! More subway openings...that will solve the problem. NO!! More 7-11-yes. Please write to ...hahhaha. Because we don't want you to feel like you've been over -saturated by more people......now that so many people/small businesses are being replaced by the new drones. Come on hop on that sexy citibike. You can do it.

Slightly west of this block of 14th, the ProLand sneaker shop at 14th and A is suddenly closed. Walked by this morning and the place was gutted, men in there working.

Between the billboard coming down on the SW corner of A/14th (exposing the greatly missed Chico 9/11 mural), Stuyvesant Stationery (a few doors down from ProLand) closing last fall, and of course the closing of the Stuyvesant PO next month, I would't be surprised if everything from Ave A to the detestable A building gets razed on that side of 14th.