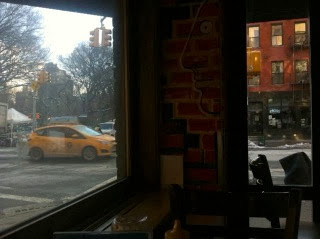 After 30 some years, 7A has closed... the owner of the restaurant that had anchored the southwest corner of Avenue A and East Seventh Street since the mid-1980s announced earlier in the month that he was closing the business... we never did hear an official reason for the closure.

Meanwhile, by all accounts, the place was busy yesterday on its last day...

Even on its last day, there's a line out the door at 7A. & it includes me & Jimmy McMillan. @damnrentparty @evgrieve pic.twitter.com/2TibvifWi4

And there was a late-afternoon happy-hour-till-we-run-out-of-booze special... 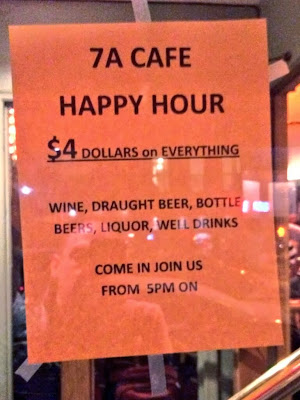 ... and some other sentiments on the last days of 7A via Twitter...

Had my final meal at @7ACafeAlphaCity last night...so sad to see them close...so many memories there.

It's the end of an era. Just had my last late night drunken meal at #7A Thanks for employing me 15 years ago! #eastvillage #nyc

Today is the last day for 7A. Another win for the blandification of New York. Whether you loved or hated the... http://t.co/aHlNdJSvgO

The rumor is that bold-face namers Serge Becker and Josh Picard are opening some kind of Southern-themed restaurant here. Yesterday, members of the staff said that none of them will have jobs at the new place.

Previously on EV Grieve:
[Updated] Reader report: 7A will close at the end of the month

Are Serge Becker and Josh Picard taking over 7A?
Posted by Grieve at 5:25 AM

I don't want to spread a rumor but could it be possible the owners want a piece of the foodie restaurant dollar with higher prices and imagined prestige of being listed in a tourist blogg?

I'd put money on it that the space will become a Starbucks.

It WILL become a Josh Pickard/Serge Becker restaurant. No question. Sam e people who took over Peels on the Bowery.

These days when we wish upon a star we get Josh Pickard/Serge Becker, the Walt Disney of Theme Restaurants. Chim Chim Cher-ee in the EEE EEE EV.

Thanks for decades of great consistent food, good service and special thanks for tolerating my kids and their LES friends during the 80's/90's. I will really miss your ginger carrot dressing.

I bet the whole building has been sold and it will soon come down and be replaced by an NYU dorm. I also predict NYU will soon make their dorms jump proof like their library already is.

this closure, i think, is the final straw for me. 7A was my last go-to place for lots of occasions: a varied menu, late night, kid-friendly if you need that, but you could also get drinks, outside seating/people-watching windows and a place you could comfortably eat alone. so many memories. this nail in the coffin makes me incredibly sad. and on top of that it's incredibly sad that 7A is the final straw... it used to just be there, nothing special. but in the end, incredibly special. i think this might just do it for me.

Can we all agree that the only good thing about 7A was that they were open 24/7. The food sucked...unless it was 3am and you could barely stand up.

The worse brunch I ever had. Never understood the lines.

I must disagree about the food sucking. Maybe the dinner menu wasn't spectacular, but 7A without a doubt had the best brunch in the East Village for the price they were charging. The quality of their food on their last day was just as good as it was when I had my first meal there way back in 1993. There are few other sit-down restaurants around here that have kept up their standards to a similar level over the same length of time that are still standing (I'm thinking of Katz's and Veselka as examples). I hope whatever replaces 7A will be a decent bargain as well, but it would be ridiculous to not have doubts.

When my friend Lew and I started having brunch on Saturday's, we first went to Sixth And A. I'd heard the food wasn't too good, but the eggs and potatoes breakfast was okay. One day, Lew decided to try an omelet. I mentioned the food rumors. He said no one could ruin an omelet and I agreed, but they did. So, we started to go to Around The Clock and stayed with it until the Japanese took over, and then we settled down with Seventh And A.

I forgot that this was happening yesterday. I'm blessed that I had my most memorable brunch ever here last October.

I still can't believe it...

I may be in the minority here, but 7A always seemed to capture absolute mediocrity. I don't see how closing it is another "win for the blandification of New York" as 7A was about as bland as you could get up until relatively recently.

Yea, I am with you. I think some peoples memories of drunken revelry at 7A are clouding their memories of the food. I'm not saying it was "spit back onto your plate" bad, but it was certainly not good by any stretch. I seriously believe if this place was not open 24/7 it would have closed down YEARS ago.

I remember when I first starting go there in about 1994 - there was a bartender there that made all us guys in the neighborhood have tongues that touched the floor.

The kind of girl that we all just went there to see ... i asked her out once - to go for a ride on my motorcycle - a polite now, but back then in our early 20's it was enough - a hero just for one day!