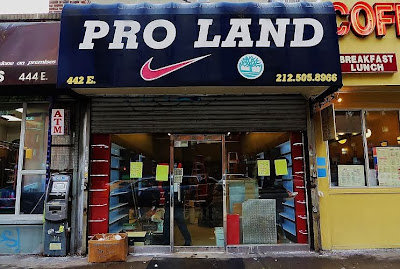 The Pro Land sneaker shop on East 14th Street near Avenue A abruptly closed the other day. There was a notice of a sale, but no word of a renovation. The space looked gutted.

Given the rumors (just rumors) that the single-level structures from the post office to the southwest corner of Avenue A will be cleared out to make way for some Double D development, it seemed plausible that Pro Land was a goner.

Per an EVG commenter Monday:

The Pro Land sneaker shop at 14th and A is suddenly closed. Walked by this morning and the place was gutted, men in there working.

Between the billboard coming down on the SW corner of A/14th (exposing the greatly missed Chico 9/11 mural), Stuyvesant Stationery (a few doors down from Pro Land) closing last fall, and of course the closing of the Stuyvesant PO next month, I would't be surprised if everything from Ave A to the detestable A Building gets razed on that side of 14th.

For now, at least, this isn't the case. As these photos yesterday by Bobby Williams show, the space has been quickly renovated and restocked... 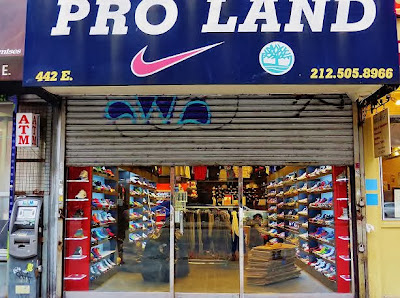 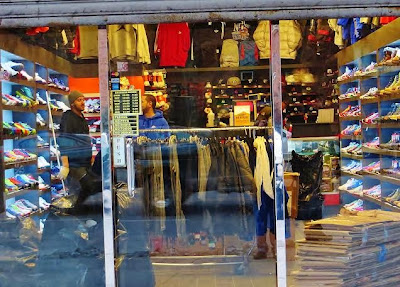 The store was to reopen last night.

The lease expires at the current location at the end of next month. The landlord reportedly told the USPS that they have other plans (residential?) for the building.

Last fall, the Stuyvesant Stationery shop next door to the post office lost its lease and closed.

Report: Closure of the Peter Stuyvesant Post Office is pretty much a done deal
Posted by Grieve at 5:01 AM

I was that anonymous commenter! Sorry, you can understand my paranoia though! Glad I was wrong. Very happy to see ProLand back. They are cool cats.

Much ado about nothing?

@Anon. 8:27 - Hardly - justifiable anxiety is more like it. Or hadn't you noticed what's going on in terms of wholesale destruction and change these days?

Yes, Gojira, of course I have noticed, hence my original comment. And I still think that one-storey stretch of 14th (dry cleaner, 24/hr coffee shop/diner, Chinese herb shop, dollar store) is doomed once the bullshit between A/B starts building. It makes me sad.

Since the post office is closing at the end of the month, a renovation and restocking of Pro land suggests they're not subletting from the post office like Hallmark did.

The post office's landlord doesn't seem much like a lot of the RE sharks now circling the neighborhood. The guy made it perfectly clear that it was the post office's decision to downsize and not renew the lease. So if the stores east of Hallmark to the corner aren't subletting they may remain as is. He may have made offers, but maybe not serious enough offers.

BTW, People complain about the Stuyvesant Post Office, but wait'll they see the alternative. Stamps and PO boxes only.

@Ken - and package pickup on 53rd Street. Yes, the landlord from the old card shop going east is different from the PO/card shop one, so those stores may be safe for a while. Let's hope.

I sure hope the USPS has plans to give the Tompkins Square station on 3rd street better hours if they're planning to diminish the Stuyvesant station.