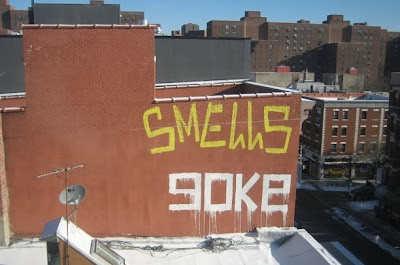 The NYPD apparently arrested three men last night for tagging the rooftop of a building in the 200 block of Avenue A, per EVG reader dwg. Looks like SMELLS took the hit.

Updated 1/30
The Post has a lot more details today about what happened here. Five people were reportedly arrested, including Cash4 — aka Russell Murphy.

Murphy, 28, was charged with making graffiti, criminal trespassing and resisting arrest after he and four others were spotted on the roof of a building at 199 Avenue A vandalizing a wall.

The five took off but were collared by cops after a short chase in which two officers suffered minor injuries, sources said.

1978 is on the phone and it wants it art form back. Nobody has the right to destroy private or public property and I hope those responsible get what's coming to them.

"smells" really sucks...his/her shit is stupid and it is not art...writing "smells" or "Cas4" or "I will miss you" is not art...it is just stupid and I'm tired of looking at it everywhere

Tagging and Graffiti are a part of the NYC landscape, whether or not you regard it as art.
Part of the flava.

Smells like crap. Throw the book at em. Graffitty may be a petty crime but its an awfully visible one, and one that actually purports to degrade and ghetto-fy its whole environment and therefore deserves some kind of draconian punishment.

Fuck you you fucking assholes!

Has been an epidemic of this crap lately. The building on 5th and A (SE) has been getting hammered. Considering that these cretins are sentenced to either a couple days ''community service' wandering around tsp stoned out, or some idiotic "class" to sit thru, why not come right out and do it again, huh.

moe - I've been LOVING the wall on 5th and A. Not the best graff but it looks great. This is the shit that keeps our neighborhood artistic. Breaking windows, leaving dog crap and littering are much worse than this burst of color. I am not speaking as a property owner, but I love seeing it to be honest.

BTW, Moe - It's not an "epidemic" or "lately". Have you ever been to the LES/East Village?

Anon 3:27, learn how to spell brah. And if you don't like graffiti, move outta the east village. You want to live in a cool cultural neighborhood or do you wanna live in a sterilized neighborhood. The only crime these fools committed is being complete and utter toys.

Waspy white yuppie checking in. I may not be from here, but I consider myself hip and edgy. I get it, and I say MORE grafitti! It's sooo edgy and urban. Some people just don't get it. I love seeing it. It expresses the raw artistry and vitality of the city. If you want clean walls move to Iowa or something!

All those fans of graffiti please invite these "artists" in your living room and let them spray pain their shit all over your walls and furniture after all its what makes property more valuable, right?

The "artists" should be required to clean every telephone poll and other public surface of stickers.

"And if you don't like graffiti, move outta the east village."

he is a TOY!!!!!!! fucking punk not even his rollers are good !! fuck him !!Cost Revs rip off king brings shame to the graff game! met this guy total idiot

In the 70's the graffiti was incredible...It was urban youth in the inner cities expressing their angst against inequality...It was on public buildings and subways and bridges...It was an attack on the city...The graffiti in our neighborhood is perpetrated by priviledged art school kids on $400 skateboards. It just feels like vandalism now...No heart..no soul...

Wow, you folks are idiots. Please post where you live, assuming it is not in the projects. I want to come and graffiti over your flat screen, and your iPhone, and your dog. Yo, it is art man, if you don't like it, don't but things that I can spray paint.

graffiti damages every neighborhood. i dont like to walk down the street and look at all this vandalisim. people who live in the e.v. deserve better. why should i pay 3k a month for an apartment to look at this.... the quality of life sucks especially on ave A with all the homeless and methodones waiting around for a handout..if you do graffiti u deserve to be locked up for destroying property and destroying the neighborhood.

"If you want clean walls move to Iowa or something!"

anon8:52 - you SHOULDN'T pay 3k for the apartment. move the fuck out. so the prices come down. we don't want people like you.

Anon 1013 - agrred, other person move back to the upper west side. GOOOOO AWAAAAAAAAAAY

why pay 3k for a spot you don't even like. QQ

Wait; people are paying $400 for skateboards?!?

If it wasn't illegal then he wouldn't have been doing it.

We are requesting donations in BTC Bitcoin to help pay for legal defense.

or send btc to this address

Who are all these tools that are saying they dont like graffiti or that its not an art or blah blah. I'm sure your marketing job, or PR job, or finance job or whatever else you moved here from oklahoma to do wont be happy with you spending your time writing on blogs. If you dont like graff then dont look at it, im sure youre staring at your iphone half the time anyway, so shut up

There is no graffiti on the houses with lush lawns and long drive ways. And at least I don't have to look at boring khaki pant wearing yuppies in their floor to ceiling windowed condo's. They are so bland, they should at least strip down to boxers or panties if I have to see them. Even their designer dogs are boring, talk about sucking the life out of a neighborhood.

A legal defense fund for graffiti defendants? What a waste. Doctors Without Borders or some other organization would be a better bang for your charitable buck.

i love graffiti and my only complaint is that i wish it was better and that there was more of it.

Debating graffiti's existence in New York City in 2014 is ridiculous. It's expression of varying artistic quality and the reasons for doing it vary even more.

People get scared of things they can't understand, especially big bold juicy nasty drippy tags in spraypaint in their hood that they can't even read.

Graffiti does not cause any "damage" by changing the color of a surface. It is a creation and product of New York City and New York would not be what it is without graffiti / posters / stickers / and other forms of 'street communication' blanketing the exterior of our city. You may not like how it looks or understand it, but it is a much needed counter-balance to corporations owning our public space and minds.

I just want to clear everything up and give a personal FUCK YOU from a graffiti writer to a east village hipster who pays upwards of $4K for an apartment and still wont take in the beauty of the grime of the city (which is what your paying for basically if you live on avenue A.) Go live in Bumfuck Idaho if your that pissed off about it. Oh, wait then you would have to deal with 60 year old fuck-ups with their lawn mowers blowing 24/7. What a shame...