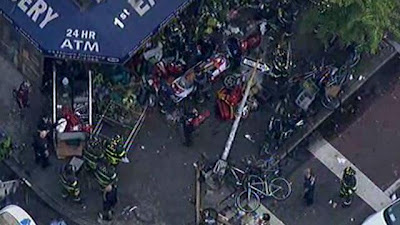 Queens resident Shaun Martin, who was allegedly drunk and high on PCP when he plowed his car into East Village Farm and Grocery last June, was ordered held on a $1 million bail today as the District Attorney's office weighs potential homicide charges, the Daily News reports.

Akkas Ali, the florist at the corner store on Second Avenue who was critically injured in the crash, died on Jan. 1. According to Serena Solomon at DNAinfo, Ali, 63, went into cardiac arrest when a tracheostomy tube that he needed to help him breathe because of his injuries became lodged in his throat.

According to the Daily News, while free on bail in early December, police arrested the 32-year-old Martin for threatening to shoot someone while possessing cocaine outside a club in East Elmhurst.

"while free on bail in early December, police arrested the 32-year-old Martin for threatening to shoot someone while possessing cocaine outside a club in East Elmhurst."

Wow. This guy is the definition of scum of the earth...

Justice for Akkas Ali and hs family, this guy should never be free to roam the streets again.

So sad. Rest In Peace, friend

What the hell is there to mull? The only reason Akkas was in rehab with a tube in his throat in the first place was because of this piece of shit; too damn bad he didn't die rather than the good man who did.

Oh man...I didn't even know he had died.

Drug addicts senselessly killing people? Sounds like the East Village this site misses so much!

Druggies suck ass too, but we definitely don't need any of these "bro" spoiled kids around the neighborhood, either. I wish those junkies would target those prep jerks instead. I'm tired of you all being immune for screaming "wooooo" all fucking day and night.