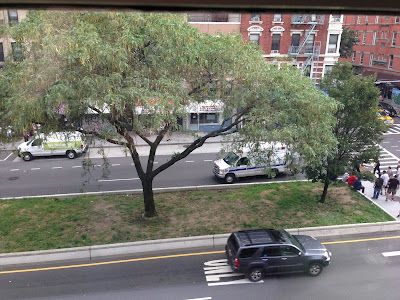 From the EVG inbox…

Today, Street Justice Activists with Right of Way will travel 30 miles by bicycle across 3 boroughs to stencil body outlines of dead pedestrians at 7 sites where New Yorkers over 70 years old have recently been killed by drivers. In 6 of these cases, the NYPD has not filed any charges. In a seventh, the driver was charged only with leaving the scene, not for the illegal left turn that led to the pedestrian’s death.

The event starts at 9 a.m. at East Houston and Clinton Street … at the site where East Village resident Meipui Chow Leon, 73, was killed on Aug. 23 by a Whole Foods van while crossing the street.

WCBS reports that four pedestrians have been killed this weekend by cars.

More accidents on East Houston Street
Posted by Grieve at 7:36 AM

Www.crashstat.org, search yahoo for global accidents, too many to mention.

Saw a left turn on red at Houston & B yesterday. It's a terrifying corner.

Today on CBS Sunday Morning, a GM executive discussed their plans for self-driving cars, which he said would one day soon eliminate almost all accidents and will make it impossible for cars to speed, eliminating speeding tickets and the entire profession of lawyers who specialize in auto accidents. He also predicted that due to urban congestion, one day humans will not be allowed to drive cars anymore since the technology is so superior to our own driving abilities.

In Asia they are already automatically using technology for warning and ticketing taxis or speeding, a technology we need to implement asap. I have seen a dozen horrible taxi crashes in the past year alone, with serious injuries and cars that are completely totaled due to speeding. But until they are reined in the carnage will continue.

Luckily Mayor De Blasio is already assigning more cops to focus on reckless driving and speeding crimes, but much more is needed.

Hardly a day goes by when I don't see a taxi speed up to go through a yellow light or even one that just turned red.
They need serious fines and even hoosegow time.

"Hardly a day goes by when I don't see a taxi speed up to go through a yellow light or even one that just turned red."

Thanks for posting this. It seems that NYC media are finally starting to take notice of this problem and hopefully we can gain some momentum to fight for safe streets. For the benefit of all: pedestrians, cyclists, but also motorists who share space with reckless drivers. I wish drivers understood that increased enforcement of traffic laws will help keep everyone safe, also people in cars. We should all be on the same side on this.

Taxis are out of control, its insane on Sat night trying to go down 2nd Ave, the cabs weave in and out of the lanes without blinkers, they stop without warning in either side lane making no attempt to get out of the way...and from experience we know if you tag a bad driver, they just leave the country or buy a new id.