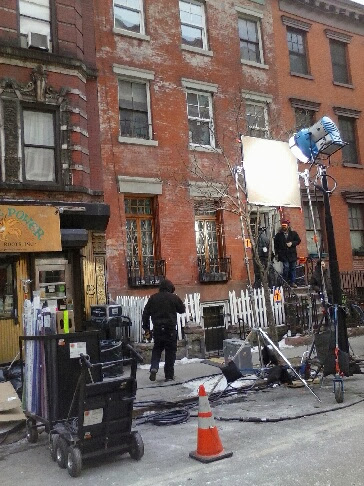 [Photo by Bill the Libertarian Anarchist]

The low-budget adaption of the Eleanor Henderson novel "Ten Thousand Saints" has started principal photography in the East Village... crews filmed on East Ninth Street yesterday (a popular location for shoots these days) ...

A quickie plot via The Hollywood Reporter, who has more details on the production:

"'Saints' is set in New York's Lower East Side in the 1980s and is a coming-of-age story that follows three screwed-up young people and their equally screwed-up parents in the age of CBGB, yuppies and the tinderbox of gentrification that exploded into the Tompkins Square Riots.

Curious to see how the Tompkins Square Park Riots are depicted in the film. Maybe just via mentions from the characters? Or will the filmmakers choose to recreate part of it (and in the winter)? After all, we recently saw the return of Wigstock in the Park for a movie shoot.
Posted by Grieve at 5:00 AM

Why the hell does this block keep getting filming? And now it's been twice in the same damn building...that's supposedly been sold to Alan Cummings.

I live on this block and have been so sick of filming in the neighborhood.

Hope this one is better than Inside Llewen Davis, which was a real disappointment and did nothing to bring back the spirit of the Village of the early 60s. If you look deep inside Llewen Davis, unfortunately there isn't any there there, except that he's mostly a drunk rude jerk who even heckles other performers. The best part of the movie besides when he gets punched in the face was the cat, too bad he didn't get a few scenes of his own. At least it received no major Oscar nominations, in spite of all the Coen brother hype.

The next time someone makes a movie about life in the West Village, I just hope they don't shoot most of it in the East Village. For those of us who live and grew up in both of them, there is a pretty big difference.

Between the story and the team attached it it, this sounds like it has the potential to be a really interesting film.

American Splendor was outstanding but Saints won't be a movie for anybody who actually lived in the EV back then. It's hard to get period right.

And CBGBs was hot in the 1970s, not the 1980s. It was pretty much a relic after the Mudd Club opened, and then the Pyramid and 516/Area and all the after hours places in the neighborhood.

Why does every movie these days have to be about "screw up people"? Audiences are always subjected to self absorbed people that can't stop talking about themselves and their "amazing" problems. Grow up.

This is a movie about the mid-80s hardcore scene that had shows at CBs and Pyramid and other LES venues. It's not about screwed up people. It is about the straight edge scene (no drugs, drink) and AIDS in 80s. It is based on a fantastic book. It will mark the first time the New York Hardcore scene makes it to Hollywood. Ethan Hawke plays a cool stoner dad who takes care of his son's best friend when the son dies. Win, win, win.