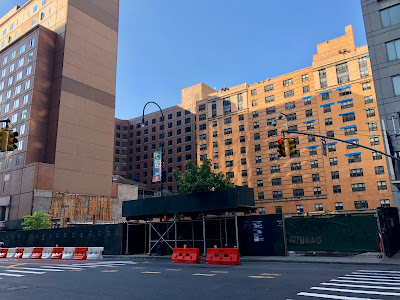 The former P.C. Richard and Son complex on 14th Street at Irving Place has been KO'd ... 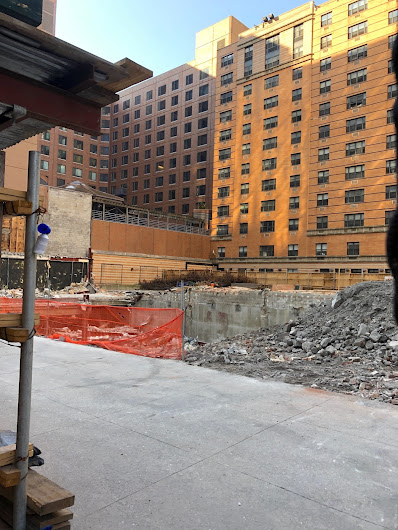 Workers have mostly cleared the site for the eventual construction of the 22-story Union Square Tech Training Center (aka tech hub). Foundation work is expected soon.

While there's noticeable progress on this new-building front, the Village Preservation is left wondering what happened to the commitments that were made last summer as part of the tech hub approval "that have been broken or not been met."

Per that letter: "It is deeply disturbing to see that a full year after the approval, while the developer has moved full steam ahead with their project, there has been no movement whatsoever on any of these incredibly modest protections which were promised."

On the occasion of a year having passed since the City Planning Commission approved the upzoning for the 14th Street Tech Hub, we pointed out that the sole zoning protection for the impacted neighborhood promised by Councilmember Rivera and the City – the imposition of a requirement of a special permit for new hotels in the 3rd and 4th Avenue corridors — has not been implemented or even drafted, nor had a promised “tenant protection campaign” for area residents which was to include “community-wide forums” and “door-knocking campaigns.”

The group also took issue with the blocking of pedestrian and vehicular traffic outside the site.

We further pointed out that the developer explicitly committed that all demolition and construction work would be done within the bounds of the property and that neither the sidewalk on 14th Street nor the roadbed would be encroached upon.

Instead, with City permission, the developer has encroached upon the sidewalk and two of three lanes of eastbound traffic, forcing pedestrians waiting for the bus to stand in the street, and completely blocking the single remaining lane of eastbound traffic when MTA buses stop to pick up and let off passengers in front of the tech hub site (where a bus stop is located). 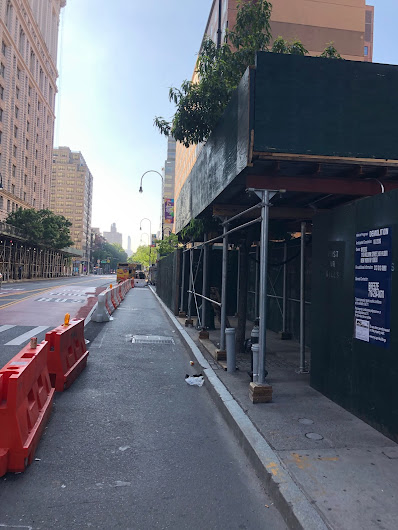 Curbed has more on the story here, including comments from Rivera's office and the Department of City Planning, who says "it is working to address neighborhood concerns raised by the Council member and is combing through what a special hotel permit would entail for the area."

A spokesperson for de Blasio told Gothamist last week that the administration was "actively working to address the concerns respect to future development as well as preservation of existing housing in the Union Square South area."

The project is being developed jointly by the city’s Economic Development Corp. and RAL. The Union Square Tech Training Center includes Civic Hall, which will offer digital skills for low-income residents, as well as market-rate retail, office space and a food hall.

The hub, championed by Mayor de Blasio and initially announced in early 2017, passed through the city’s Uniform Land Use Review Process earlier in 2018, capped off by a unanimous City Council vote in August. A rezoning was required to build the the structure, which is larger than what current commercial zoning allows.

Report: Preservationists want probe of the tech hub deal on 14th Street
Posted by Grieve at 4:23 AM

I'm ticked about all of this, but it's especially galling that they were allowed to take part of the street for demo/construction WHILE THE L TRAIN CONSTRUCTION IS HAPPENING! We desperately need all the travel space we can get along this corridor. Bus travel is miserable. I didn't even know the part about them promising not to use it. And then the city gives them the permit anyway?!? WTF? GAH!

ReZone-Rivera and Death-of-the-City De Blasio are at it again. They are so arrogant that they don't feel it necessary to keep their legal commitments to the neighborhood. This is one of the reasons why people should flood Ruin-the-EV-Rivera's email with protests about the East River Park and the repaving of the asphalt at TSP. SHE'S A LIAR. Maybe just maybe one day she will wake up and realize that ReZone-Rivera, Ruin-the-EV-Rivera, Air-Rights-Rivera... just might end up as ReCall-Rivera. EMAIL! EMAIL! EMAIL!

One thing after another with this boondoggle of a giveaway to de Blasio's donor friends and Capalino. Can't believe this hasn't been investigated, or maybe it is part of the ongoing investigation into de Blasio and his real estate cronies. If only NYC had a Comptroller, or Public Advocate to look into these things.

I hereby declare it to be called "Carlina Rivera's Tech Hub" from henceforth.