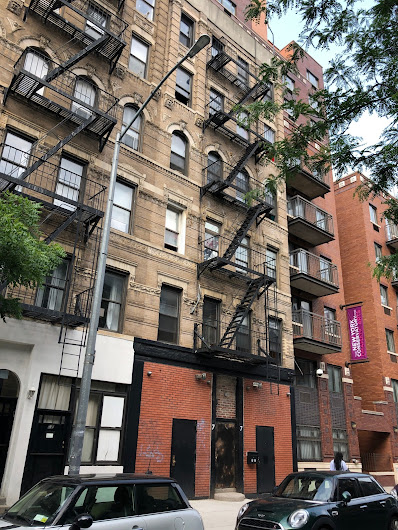 As I first reported back on Thursday, the former Hells Angels clubhouse sold for $7.75 million.

The $2 million renovation will create two retail spaces on the ground floor where the clubhouse bar used to be — and one storefront could become a shrine to the burly bikers.

Blatter said he has been contacted by someone curating a Hells Angels museum, and another about a barber shop.

“The location is phenomenal,” Better Living’s Jonathan Sondry gushed. “It is a rare occasion to find a fully vacant building in Manhattan.”

The basement repair shop — equipped with a scissor lift that lowered motorcycles from the sidewalk — will be cleared out. The 16 “crash pads” once used by gang members — one was adorned with a swastika — will become 22 one- and two-bedroom units priced around $3,500 per month.

Sondry said he doesn’t plan to use the building’s history as a selling point, because he doubts oblivious 20-somethings will care.

To date, there haven't been any work permits filed with the DOB for the address.

Previously on EV Grieve:
After 50 years on the block, the Hells Angels appear to be selling their 3rd Street clubhouse

The Hells Angels have left the East Village

This is what the Hells Angels building sold for
Posted by Grieve at 4:15 AM

Plus I hear they threw in all the dead bodies buried in the basement for free. What a great deal!

Not that I was ever an admirer of that "group" but the idea of a Hells Angles "theme bar or restaurant" would be the most asshole real estate move ever.

Whether we like it or not, the HA were a part of this neighborhood's history. To fully remove all mention of HA just to rent to 'young people who don't care' (where is this idea coming from? I'm a youth and I care so, so much about the history of every stone in the EV) seems so...weird. Idk. No winning here. Just hope Icon doesn't get their hands on it.

No thanks! IMO, there are not enough exorcists or shamans or crystals to EVER clear the bad energy from that building.

How about a theme bar with prison cells to 'honor' the thugs who used to live there?

The great Jimi Hendrix, Lou Reed, the Ramones, etc were also associated with the EV. These were great ARTISTS, who left behind art that people actually still ENJOY. And yet nobody gives a shit about places like Fillmore East or whatever. So yeah I agree with the new owner--good idea, nobody really cares about this old biker club from the 60s.

why can't they ever give YOU some credit for breaking news stories?

i lived a block away. Every day for 5 years i walked past the clubhouse; the sidewalk immaculate, the nods (though not exactly 'friendly') always verily cordial. And they looked out for their neighbors, making it the safest street in NYC. By some, the angels will be greatly missed.

I bet Mary Ann Campbell's family and friends still greatly miss her, too.

I think the past is called the past for a reason and if it creates more housing which in case no one has noticed there are so many
homeless people we definitely need more housing available but I will say the price is out rageous and if anything it I feel should be to help the community and make the apartments but at a reasonable price especially with how many people have negative comments about the building believe me I don't think homeless people wouldn't really care what it USE TO BE and would really appreciate having a real home this is just my
own opinion on the whole thing I love the idea of more housing but the prices they are asking is totally outrageous like I said what use to be could make a big difference in what it could be for so many people it would get a different comment if it was to help the community I hope whoever is planning to make this place that so many people have such memories of all the bad things that happened to other people's loved ones feel alot better knowing that the person building the apartments was doing something to create an something to change something that hurt so many would now be to help so many would maybe create something great so people would be able to make new memories about how bad it was and how someone did something so wonderful with it sorry just my own opinion verses the already tainted bad memories it would show someone care's enough to make a horrible once a horrific place into something completely opposite and amazing for so many people #TURNTHISHORRIBLEPLACEINTOSOMETHINGCOMPLETELYOPPOSITEANDCREATESOMETHINGCOMPLETELYWONDERFULFORTHEPEOPLETOHAVEADIFFERENTFEELINGANDGETTHEWONDERFULCOMMENTSYOURLOOKINGFOR !!!