Here then, the full reveal at the explosion site condoplex 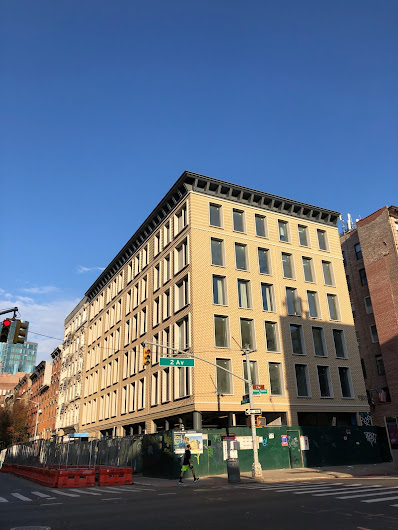 Workers removed the remaining section of the sidewalk bridge around the all-new 45 E. Seventh St. on Thursday... offering a full look at the 21-unit condoplex with retail space here on Second Avenue.
As reported previously, the building sits on two of the three lots destroyed during the deadly gas explosion here on March 26, 2015.
Sales commenced back in the summer for the units in the Morris Adjmi-designed building. Prices range from $1.35 million for a one-bedroomer and $1.995 million to $4 million for two and three bedrooms ... with the penthouse asking more than $8 million. 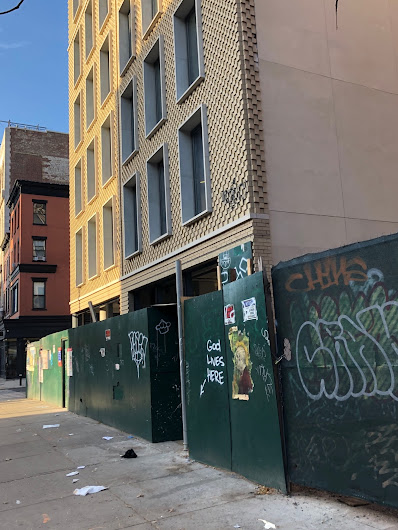 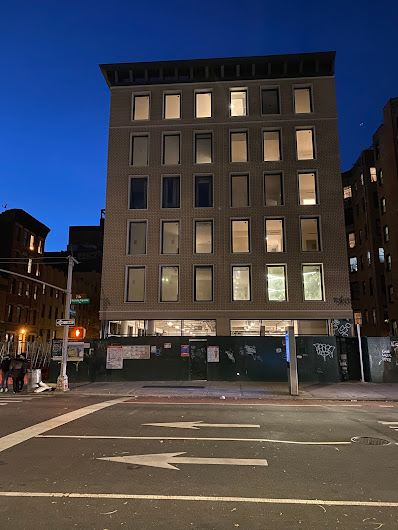 The property will include a commemorative plaque that honors the two men who died here during the explosion: Nicholas Figueroa and Moises Locón. In October 2017, city officials unveiled new street blades that co-name this northwest corner of Second Avenue and Seventh Street after the two men.
Previously on EV Grieve:• Trio responsible for the deadly 2nd Avenue gas explosion sentenced to 4 to 12 years in prison (Jan. 17)• Convicted gas explosion landlord Maria Hrynenko out on bail; contractor, plumber remain behind bars (Jan. 18)
Posted by Grieve at 5:00 AM

Beautiful facade and color but all those brick indentations are perfect spots for grime, dust, and toxic air particles to accumulate on. It will never look this clean and pretty ever again. Downtown dirt always wins.

Could be the ugliest building on 2nd, but after 30+ years on the LES, who am I to judge?

It stands out because they didn’t use red brick

I can't imagine living here knowing the people who owned this land profited off of the deaths of two people.

I would never live in that building. First of all, I'd never pay those ridiculous prices, and secondly I'd feel that there'd always be bad energy there.

I still think all the tenants displaced by the explosion should have first dibs on units—because if you live in this building, you never have to look at it when you get up in the morning. [paraphrasing Frank Lloyd Wright speaking about Harkness Tower in New Haven.]

$8 million for a EV apartment, sigh

I think they did a good job of making the building fit in to the neighborhood, architecturally. We've seen worse all over the East Village, and no one realistically expects new buildings to be replica's of old buildings (thankfully, considering how cheaply most tenements were built), but its a shame that 1) the original tenants were not offered apartments (or were they?) and 2) that it is condos, not rentals, or better yet, affordable housing, which would have been they way to go for good karma. I just hope the ground floor is not another Rite-Aid or bank.

It looks totally out of place in the neighborhood, traditionally our windows open - this thing is sealed like a tomb. If the power blows again, or their power gets turned off for nonpayment, do they suffocate? I can't imagine living like that.