A break in at Popeyes 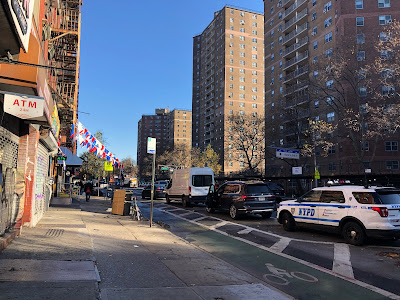 The NYPD is at the Popeyes location on First Avenue between Second Street and Third Street this morning... after a report of a break in here... 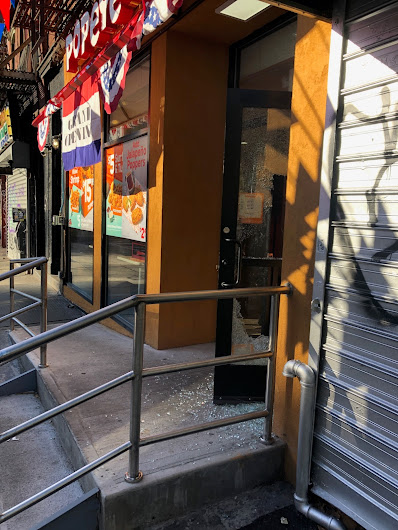 As you can see, someone smashed in the front door.
According to the Citizen app at 6:49 a.m., "two suspects reporteldy fled from the scene on foot." It's not known at the moment if anything was taken.
The fried-chicken franchise opened here on Oct. 17.
Posted by Grieve at 10:36 AM

This place just opened. Well welcome to the neighborhood.

@Anonymous 1:52 - What a moronic comment. This is a franchise, owned by ordinary people, not a corporation, who are just trying to make a living and offer a service the same way the owners of B&H are, and for you to somehow suggest the former should be targeted to protect the latter is utterly shameful. NO ONE should have their place of business broken into by fucking criminal thugs who should be breathing the air in a correctional facility instead of in NYC. Period, full stop.

Popeye's? Really? What did they think they were going to walk away with? Frozen chicken tenders and biscuits? I am sure they discovered the safe was locked and inaccessible. I feel bad for the new management and ownership. They've only been open less than two months. Hope they catch these two stupid criminals.

Where's Popeye when you need him?

He was Bluto in the comics and movie theater cartoons, but became Brutus on television, out of (mistaken) fears of a copyright issue.