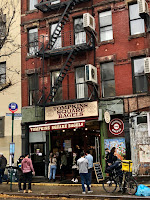 By all accounts, it looked like business as usual yesterday at Tompkins Square Bagels at 165 Avenue A between 10th Street and 11th Street. Customers and delivery people were coming and going through the open doors. The smell of fresh-baked bagels was drifting from inside.
However, behind the scenes, patrons may not know what owner Christopher Pugliese and his team needed to do to open.
On Wednesday, a carbon monoxide sensor went off related to the storefront's hot water heater.
"We discovered a hole in the flue that brings in replacement air. Because of the hole, replacement air wasn’t getting into the basement, thus the high carbon monoxide reading," Pugliese said.
However, despite identifying the problem and quickly having it repaired, ConEd shut off the gas to the business. And Pugliese is angry.
"They could've disconnected the water heater. I get why they turned off the gas. It's easier ... I get that life was at risk," said Pugliese, stressing that safety is always a top concern. "But once it's determined that it wasn't a gas issue and the flue had been fixed, I shouldn't have to file permits and jump through hoops, pay fees, and be put on a ConEd waitlist. That is absolute bullshit."
For now, he's estimating a four- to eight-week period to get gas service to the bagel shop restored, a process that includes hiring a plumber, filing permits with the Department of Buildings, waiting for the city to inspect the space — all before ConEd even steps in, all for an issue that has already been addressed.
On Wednesday, Pugliese figured he'd need to close for the interim. "If we didn’t have the Second Avenue store this could've been a death blow," he said.
By yesterday morning, however, Tompkins Square Bagels, which first opened in December 2011, was up and running on Avenue A.
"Over the past 24 hours I bought three electric grills and had three 220-volt power lines installed so I could cook," he said. "They tried their best to shut me down but I am smarter and work harder than they could ever imagine."
Total cost of the interim cooking system: $7,000
"I am open in spite of the city," said Pugliese, who noted that his shops helped feed the homeless and essential front-line workers during the pandemic's worst days in the spring. "I still did my part to help this city ... and we are all in this together? I just don't see the support on the other end."
Posted by Grieve at 7:00 AM

The city, state, and especially the federal government have failed the American people. They have destroyed countless lives and businesses with their ineptitude. Shame!

This is so typical of NYC: complete disregard for local businesses.

The city appears to be unable to THINK coherently at all. They hear the word "gas" or "carbon monoxide" and it's game over.

Chris is one of the best people in this community. Recently he's had to deal with the door on the 2nd Ave. location being shattered, and now this. I admire his tenacity, but he's 100% right when he says this is bullshit on the part of NYC DOB and Con Edison.

He's ALSO right when he says he's smarter & works harder than they could ever imagine.

I'd like to hear about ACTION taken to remedy this from our local elected officials, b/c this one incident has had an outrageous and expensive impact on one of our truly wonderful local businesses.

This is just not right.

Chris, I send you my best wishes. You deserve better than this from DOB and Con Edison.

These draconian gas shut-offs, followed by the ENDLESS process it takes to get Con Ed to ever get the gas flowing again, is a billion percent unacceptable.

Con Ed has the most LEISURELY approach to these inspections that are required for getting the gas turned back on - they are just in NO RUSH AT ALL.

I wonder if any of this registers in the tiny brain of our so-called MAYOR and his staff?

And all this because of Mrs. Hrynenko and her son and their sleazy plumbers. Seems to me NYC now presumes that anyone with a gas or carbon monoxide issue is a criminal, and gets treated like one.

I had a gas leak in my apartment and called the fire department, who turned off the gas. I live in a Croman building, and they yelled at me, and said I should've called them. I doubt they would've responded that day. We were initially told 4-6 weeks to get gas back. It took 5 months to get it back, and some of that was in winter. It's maddening.

I am without cooking gas right now in my apartment, for the past 2 weeks -- god knows how many MONTHS this will go on. I have lived here for 8 years, no incidents at all -- but new 20-somethings moved in and within their 1st month here called Con Ed and got the whole building shut down. No more 4 burners and an oven... just 1 hot plate.

This is unreal. The City of New York literally hates its longtime residents and small businesses. It's a friend to big business only. And real estate. Thank God this guy refuses to give up. Such a great bagel shop and piece of comfort during this.

Also spent another $2500 to install an electric hot water heater. And I will have to wait even longer for gas because Kushner has unpaid fines and violations on the building. Even though these are unrelated to the job I'll need to do, I am penalized. Thanks a lot NYC.

This almost brings me to tears!
Chris is such a tenacious supporter of both His staff and the neighborhood, I don't know how he does it.
BUY.BAGELS.EVERY.DAY.

Look at what happened to Stage and the residents that lived above it. Insane that this is allowed to go on!

Kushie is a well-known slumlord; I wish this fact could get some national play.

For what it's worth, I also reached out to Carlina Rivera's office. Her Chief of Staff (Pedro) said that they are awaiting an update from Con Ed and are urging them to move quickly.