Is a McDonald's opening in the former Zum Schneider space on Avenue C? 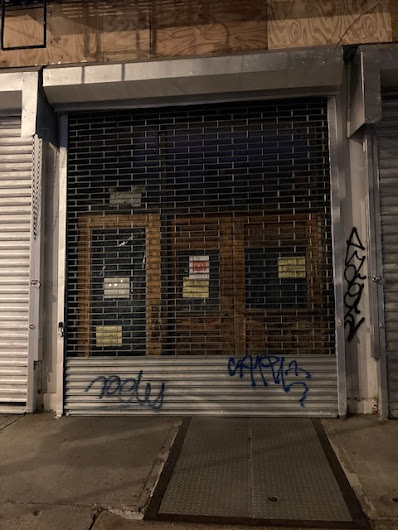 Updated 1:30 p.m.
Several readers who got a closer look at the sign say it's a fake — it looks Photoshopped and it's taped to the outside of the door, which is suspicious.
Updated 11/22
The sign has been removed.
This just in... a reader (thanks Ryan!) shares these photos from the former Zum Schneider space on Avenue C at Seventh Street ... where there is now a coming soon sign for McDonald's... 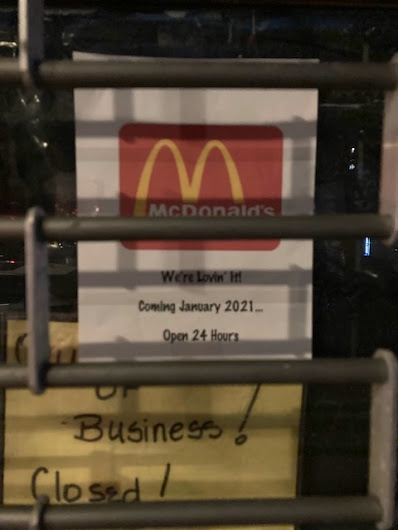 The sign, with the McDonald's logo, reads: "We're Lovin' It! Coming January 2021. Open 24 hours."
At this very moment, we're not sure it this is legit or not — possibly someone trying to be funny. (Still thinking of the Hooters hoax at the former 2nd Ave Deli site way back in 2006.) We'll look to get verification on this.
Zum Schneider, the popular biergarten and restaurant, closed here after 20 years in late February. According to Zum Schneider owner Sylvester Schneider at the time, the co-op's lawyer here on Seventh Street stated that the building had no intention to renew the lease.
If this is true, then it will mark the third McDonald's in the neighborhood, joining the one on First Avenue at 14th Street and on First Avenue near Sixth Street. (The outpost on Third Avenue closed in June 2017.)
Posted by Grieve at 6:14 AM

Oh, man... I Hope not. That place will have to be gutted if it were turned into a mcdonald's ... It's quite nice in there with the exposed brickwork etc.

Also, Zum Schneider was asked to leave due to the co-op's complaints about the crowd... I can't imagine that they'll appreciate a mcdonald's there either.

Probably fake, but boy oh boy would that be funny. You don't want to have a relatively mature bar crowd in there, you'll LOVE the kinds of characters who hang out at 24-hour McDonald'ses.

The sign is printed on basic paper & taped to the outside of the door - could easily be taken off by anyone - nice practical joke, but I'm sure it's fake 🤞

I certainly hope not. As a long term resident of this block, I have a view of this bar from my apartment. I hope this is just a cruel joke and not a reality. Otherwise, this really is bad news. Our street will reek of grease. No thanks.