The Shake Shack effect? McDonald's on 3rd Avenue at St. Mark's Place has closed after 20 years 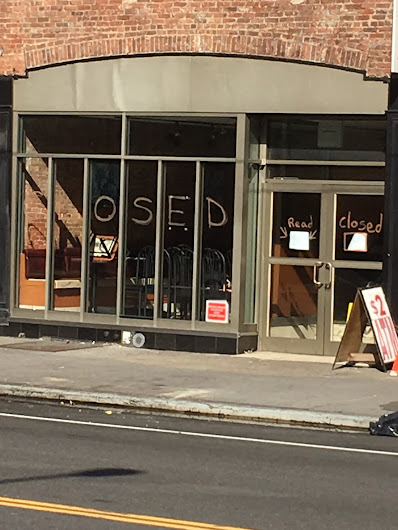 Some passersby were shocked yesterday to see that the McDonald's on Third Avenue at St. Mark's Place had shut down. A sign on the door noted, "Sadly, this location is closing." 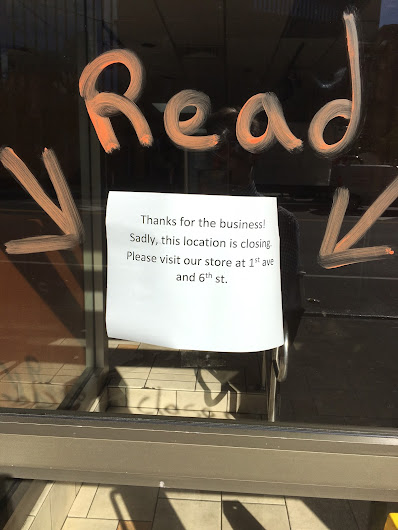 In June 2015, The Real Deal reported that real-estate investor Arthur Shapolsky was in contract to buy the corner assemblage — 23 Third Ave., 27 Third Ave. and 3 St. Mark's Place — for roughly $50 million. The site could reportedly accommodate a 41,500-square-foot commercial building or a residential one of roughly half the size.

However, Joseph Gabay, whose family owns the properties, told me last night that they have not been sold despite the continued rumors.

"McDonald’s has chosen not to renew their lease after a 20-year run," he said via email. "With the addition of 51 Astor, the dynamic of the square has changed."

As noted earlier this week, Shake Shack is expected to open later this year directly across the street in a corner space at 51 Astor Place.

"With a contemporary brand moving in like Shake Shack and McDonald's leaving the change is evident," Gabay said.

And what happened to the Golden Arches?

Bring back the Anarchy Cafe!

Terrible, even if I never went there.

Aww where will I be able to get and enjoy my Hydrogenated Oils and High-Fructose Drinks on that stretch of 3rd?

I am embarrassed to admit that I was a regular at this McDonald's and the closure doesn't surprise me. It had gotten to the point where they had to have a security guard in the dining room to keep people from camping out inside all day and even with that it was so weird to eat in there because some of the tables had been removed that I always got my stuff to go in the last year or two.

I don't think Shake Shack lemmings I mean customers would ever step into a McDs so it wasn't about competition however even drunk college kids these days want a healthier food and they can all afford $95 tasting menu restaurants too.

Maybe they should have tried a Kickstarter

I love McDonald's the 10 or 15 times I go each year. Great coffee, great egg mcmuffins, burger & fries when I am in a rush. Usually just go for the coffee. Great service, too. Great place for young kids for first job.

Shake Shack is for yuppies who want to feel better about eating the same crap that is at McDonald's.

I stopped eating McDonalds food and feel 1000 percent better. That stuff is poison mascarading as food.

Every now and then, I'll want to grab some McDonalds for a personal nostalgic reason. But every time I do, it's always full of the sketchiest crowd. It's like walking into a parole office. A friend of mine got her bag stolen at one last year, and she's never had anything stolen from her even though she's lived in the EV for 20 years.

It's junky food, but its unfortunate that we can't keep a low cost eatery. But at the same time, I can't blame anyone for not wanting to go in there.

very confusing (maybe this will adjust if it is allowed to play out---landlords cannot bring MAJOR retailers to their overpriced locations......)😎

For all the barbs thrown at Shake Shack and its customers, I don't think anyone can say with a straight face that McDonald's food is better. Shake Shack is legit pretty delicious.

So a huge chain like McDonald's was a good thing? You folks are like Republicans: no consistency. Corporations are bad when it suits your gripe and good when you want to hate on something. So amusing.

Don't conflate all fast food. McDonald's is not Burger King, the food is fine. Just not every day.

McD closing hurts employment in the area. And hurts low income people who need to eat cheap. But it also points our nabe's problem with the homeless. Twice in the last 3 weeks walking down 10th near 3rd at night 9:30? 2 different men were taking dumps in a bag between parked cars. While we rename streets for strangers and hurl insults at Shake Shack, where is the plan by our beloved Mayor and his one-party-rule government to try and solve this problem?

I don't think McDonald's preemptively closed because they thought Shake Shack would put them out of business (which it wouldn't because the prices for their food are much higher than McD'), McD's moved out because they didn't want to pay higher rent and/or they weren't making enough money at the St.Mark's location to justify renewing the lease. They also probably figured it's better to have just one location in the East Village like they have one location in Greenwich Village.

Could this mean the end of Continental soon? I hope so because Trigger sold out to the NYU/bro/yuppie crowd years ago.

McDonald's in the city has turned into a combination of a parole office in a homeless shelter. It's sad to see them go because their fries are really good, even if their milkshakes are going downhill. This year they finally got the Shamrock shake right again, but it's gone the day after St. Patrick's Day so what's the point? Their newer McCafe drinks that compete with Starbucks or actually pretty good and they're pricing is better. You can get a giant iced tea for a dollar. Plus those hot apple pie's with a cup of hot coffee always hits the spot. Now you can just pay double across the street at Shake Shack. Welcome to the future.

Wow im old i remember when everyone was upset that they were building one there. Everyone said it was the begining of the end and it was

I am mystified by the defense of McDonald's. It provides jobs? The food is good? What planet are you all on? Good riddance

You'll only see more of this as the $15 minimum wage nears.

If only they would close the one on 3rd street and Sixth ave. next...talk anout sketchy...

@Mk They've had so many robberies, late night fights and near riots in the West 3rd St McDonalds they should call in McRiker's. All those ballers from the basketball courts turn that place into the Rikers Island cafeteria. If you ever dare to go there, remember to brig a shank and a well-armed backup.

2:31pm They won't close up shop in NYC as that'd be business suicide in the Maine to DC corridor. NYC is where it's at for them.

Since I bank with Lower Eastside People's Federal Credit Union, I'm sorry to see this McDonald's go; LESPFCU belongs to the network of cash machines in McDonald's restaurants everywhere, and it's one less place I can get cash in a pinch.

Other than that, I never eat Mickey D's food; that stuff'll kill ya.

Shake Shack is a tourist magnet, the EV although not Times Sq gets a lot more tourist each year. I work from home and have a very flexible schedule so I'm out all times of the day and I see them walking slowly around taking it all in and wondering why our neighborhood is listed as a place to see in guide blogs and books. More Starbucks and written up foodie place will open here to cater to these people and not the residents. Expect low end chains like McDonalds to disappear as well. As many have commented check out a McD during the day and there are only low income and the elderly people with a few truck drivers who are in and out. The elderly will not live here after this generation dies and encroaching high end development will push out public housing sooner or later.

@Giovanni. Those aren't milk shakes at McD's. They're called "thick shakes" for a reason.

In my mind the McDonald's corp is essentially an enemy of good health. They only started reforming their menu choices once the profits began to dip.

McDonalds is not real food. Shake Shack is more expensive but real ingredients usually are. Yeah !

I live and work in the EV, and frankly, I can't wait for Shake Shack. To some people everything is a "tourist magnet"--as if those of us who live in the neighborhood aren't consumers of widely commented-upon places. Are there going to be lines, yes, indeed. Will that upset some people who post here? I sure hope so. If Shake Shack bothers you, there are lots of MacDonalds to choose from (is the one on Broadway south of Astor Place still there?)

Never even though about going to a Shake Shack since they made a deal with Bloomie to take a chunk of Madison Sq park to privatize. If I ate that kind of food I would simply make it at home, eating out is for the stuff that demands some decent cooking skills, a big variety of herbs, seasoning and ingredients, not ground beef, lettuce and a tomato.

Tourist don't eat at mom and pop unless some foodie blogger has anointed it worthy, SS has enough of a corporate chain look to make tourist feel "safe" and unchallenged. To each his or her own but look at the larger gentrification picture and decide if you want to slow it or keep it coming full speed.

DrGecko said: @Giovanni. Those aren't milk shakes at McD's. They're called "thick shakes" for a reason.

I think we've known for years that little plastic beads are what makes 'em thick, amirite?

I can't even deal with this right now. First, I've had to deal with the onset of Trump and his draconian cabinet of dinosaurs. But, now this? I will have issues coping with this loss.

Always remember the Shake Shack motto: "The longer the line is, the better our food tastes."

An example how lemming like the Shack's customers and foodies are : http://www.grubstreet.com/2014/06/shake-shack-line-david-chang-shrimp-stack-burger.html

@Scuba Diva - Maybe the thickener is pectin, also used in Kaopectate. That would explain a few things (and not just the taste).

Stop with the urban myths. Their shakes are regular shakes, geez.

This is too bad because the food was always slightly better at this one than on first ave.

My god, I had forgotten about the west 3rd street one! It really was like the Rikers cafeteria! I once saw some thug beat up a girl there because he wanted her spot on line. The one on Essex and Delancey is also full of a pretty creepy cast of characters.

What is it about McDonalds that attracts people like that? It's not like its the only cheap joint to get food. Is it because the people there really don't care what goes on and that it's too corporate to just throw loitering junkies and hustlers out?

what i wonder is, whatever happened to the DJ guy that used to be a couple doors down???