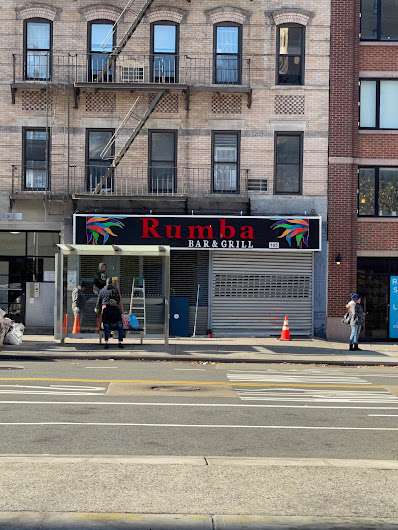 Workers put up the signage yesterday for Rumba Bar & Grill at 185 Avenue C.
The bar-restaurant with a Latin-influenced menu has been in the works for awhile here between 11th Street and 12th Street... we first mentioned it in September 2019 when the applicants, who also run Salome Latin Cuisine on Westchester Avenue in the Bronx, were to appear before CB3.
With the arrival of the sign, it appears they are getting closer to opening.
There has been a lot of turnover in recent years at this address. The last tenant, Bar Taco, which closed in early 2019, took over the space from a short-lived venture called Malcriada, a "Latino Gastropub" ... which arrived after Kaz, another short-lived venture that lasted seven months.Cafecito, the Cuban-style cafe, had a good run here, closing in early 2016 after 14 years in business.
Thanks to Vinny & O for the photo!
Posted by Grieve at 4:50 AM

Yeah, that should tell you we need a decent restaurant here and not a bar.

Why did they wait a year? And now try to open when everything else is either struggling or failing?

Liquor License backlog because of Covid delayed it severely.