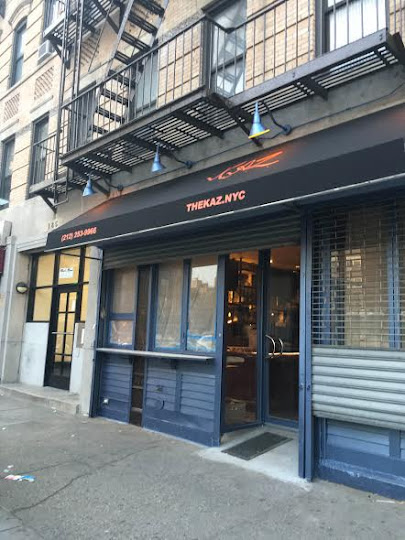 The signage for Kaz has arrived at 185 Avenue C near 12th Street.

We don't know too much about the place, which is taking over the former Cafecito space.

The applicant was on CB3's SLA committee docket in February (as Caz, per the paperwork) for a full liquor license (like Cafecito had). The proposed menu included salads, sandwiches and various items described as "large bites." (The menu is on the questionnaire here.)

CB3 recommended to deny the license, according to the minutes from the meeting...

WHEREAS, notwithstanding that this location has a business with a full on-premise liquor license, that this application is for a bulk asset sale, and that this applicant furnished twenty- nine (29) petition signatures in support of its application, this applicant did not demonstrate that it has the experience or is prepared to operate a business with a full on-premise liquor license, in that it has limited experience managing a licensed business outside of this community since 2013 and did not articulate a well-thought out business plan with defined personnel and menu; and

WHEREAS, although respresented to be a restaurant, the proposed business plan appears to be that of a bar serving a limited menu with proposed later hours and three (3) large screen televisions...

In any event, it looks as if Kaz is moving forward with beer and wine ... this reader photo from last week shows more than 20 taps (and there are apparently more not pictured)... 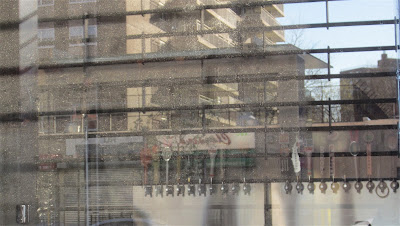 Cafecito closed at the end of January after 12 years in business. No word on an opening date for Kaz.
Posted by Grieve at 4:10 AM

We now import our Kielbasi from Greenpoint, and salads from farmer's in Brooklyn? Kaz -- Caz on the CB application -- seems very confused, as well unsure of the spelling of their establishment, as to where they are, geographically. Lower East Side, Greenpoint? Once we get the happy hour going, from 4 to 8PM, who'll care?

Definitely carpetbaggers, at the CB meeting overheard one of them mocking residents who were there for saint marks place talking about over saturation.

Is that a Bad Brains reference from blue glass?

They've got to take into consideration the residents in the building above as far as hours during the week.