Dempsey's Pub on 2nd Avenue closes for good on Sunday 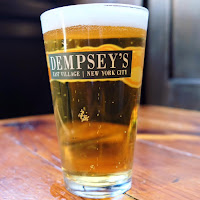 After 24 years in business, Dempsey's Pub on Second Avenue between East Third Street and East Fourth Street is closing its doors for good on Sunday night.

Reps for Dempsey's issued a press announcement yesterday. Per the news release:

Opening in 1992 as Jack Dempsey’s Pub, [the bar] quickly became the go to spot for locals and NYU students alike. The sports bar transitioned to Dempsey’s Pub in 1998 after being acquired solely by Tom O’Byrne.

Ask any NYU student or neighborhood local and they will be sure to have had a fond memory at this East Village institution. Since opening their doors they have cultivated a crowd that has depended upon their various programming from sports nights, to showcasing local Celtic bands on Tuesday nights, to their famous Wednesday trivia nights.

These popular events will be moving just around the corner to their sister pub, Slainte, located on 304 Bowery.

He also added that the changing nature of the neighborhood had played a part in his decision to close up shop. "Obviously part of it is related to costs, and the demand for the type of place like Dempsey's is not there anymore in the way it was before."

According to the closing announcement, Dempey's will run happy hour specials "such as $5 beer, wine and well drinks" through the weekend, "ending on Sunday with can-bottle beer specials all night."

Email ThisBlogThis!Share to TwitterShare to FacebookShare to Pinterest
Labels: Dempsey's

I've been hearing a lot lately, especially in announcing the closing of certain places, of "changing demographics." Can anyone explain this?

It would think changing demographics is not the real reason for this place's closing. There are more bros around than ever and new sports bar continue to open. I suppose a much higher lease, and competition from all those new sports bars are the real reasons for the closure.

Looking forward for a Michelin starred restaurant to open here. More nice things for us.

It's not a lease - I'm quite sure the owner of the bar owns the building. I think he's feeling the effects of running four businesses (two Coopers locations, Slainte and this bar) and made a business decision.

It makes me very sad - I have spent a lot of time here with friends in the past 15 years, and I will miss the place as well as the staff and other customers.

All the best to Tom and his family as well!

Well, there are too many bars in the neighborhood. At least now there will be one less.

That bar has been open since 1992! Congratulations on a great run! Bars and restaurants have a shelf life in this town and nobody can know that more than the man writing the checks. It had ran its course and it was time. Give them a break, the people on these comments are such mean spirited twerps, I feel bad for EV Grieve who does such a good job reporting local events to have all these nasty folks commenting.

I spent preparatory hours at Jack Dempsey's before a couple of the most disappointing sexual encounters of my life. Not sorry to see it go.

Last cheetah on the Serengeti said...

No doubt this closure is the delayed result of ending their live jazz policy back in 1995...

I enjoyed the band Gravity who played there often in the early 1990s.