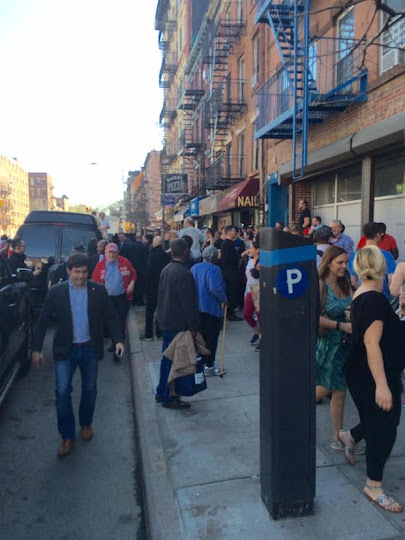 This afternoon, Hillary Clinton's NYC campaign trail took her to Mikey Likes It, the ice cream shop on Avenue A between East 12th Street and East 13th Street...

.@HillaryClinton tries a sundae (called "Victory") that Mikey created for her @MikeyLikesItNY: pic.twitter.com/PkrB76D69W

Meanwhile... EVG reader John Iz shares this photo of some young adults canvassing for Bernie Sanders on East 11th Street between Avenue B and Avenue C...

GENUK WITH THE ICE CREAM ALREADY!!!

Was it paid for by GS? Is she releasing the transcript for this? Did she email this?

Hillary on Avenue A?!?! Maybe she was looking for some southern-style biscuits.

Pretty sure those young rapscallions for Bernie made their way into my building near the 11/C intersection and hung Bernie door tags on every single knob...

Funny, just coming back from Astor Place subway I didn't see a single political person or poster or sticker - there is so little real political organizing today - its all about clicking Like or FOLLOW on the cell phone - by 2020 will they have figured out how to allow the millenials to vote on their surveillance devices, I mean cell phone.

nygrump: Tell that to the 6 different Bernie reps who showed up to our door. Also, we've received at least Bernie flyer in the mail everyday for the last week. We've also received numerous phone calls from Sanders folks. All of this seems moot because I think we're both voting Hilary.

Anon 8:13 - is there a possibility you were on an undecided list so you were targeted? I may have just missed them, but I really would have expected more energy from Bernie's supporters. If Bernie hadn't said anything less than laudatory about Israel, he would have already won.

Apparently NY is having some registration issues I would expect to see in some backwards corrupt state like Louisiana, or Pennsylvania. Tomorrow might be interesting.

Hillary and Bernie supporters were all over Tompkins Square, Washington Square, and Union Square Parks all weekend and again today. I have so many Bernie stickers on me now that I almost can't feel the Bern. Go Bernie!

I went right there after reading this today, to support their small business and bought the victory, I shared it with my friends at my local bar, it was divine! Their story is beautiful, I am so happy I know more about them and what they are working towards! They were lovely!

Got bombarded with BS msgs/calls/flyers .....and the "visitors"knew I supported Hillary. ..BEFORE I told them--this...so, guess MY information was part of that HACKED/Accessed by BS and His BS Data Manager---at the beginning. ...SOMEHOW, all this has NOT changed my mind--'''---Hillary fought for and represented US. ..and I'm voting for her...WE need a REAL ADVOCATE for US...NOT someone, like BS that thinks Pushy/Rude/Crude is good enough

All I've seen are Bernie - buttons, t-shirts, polite and eager supporters everywhere in the EV - no HRC at all... Bern baby Bern!!!

She just had to have an ice cream flavor. Keep focusing on the big issues, Hill.

If you like Bernie, you should move to Cuba or Venezuela.

Of all the days to miss Avenue A... she might have dropped by Ray's for an egg cream while she was over there!

Victim advocacy groups and grief councelors were called to NYU yesterday because someone chalked "TRUMP 2016" on their Stuyvesant Street building. Some students were seen curled up and rocking back and forth on the sidewalk mumbling something about the witches pinching them.

if you could vote for ray and egg creams, I WOULD! happy voting, y'all!

CBS this morning showed a snippet of Hillary eating her sundae, Mikey by her side. It was about 14 minutes into the broadcast.

@7:22 AM
That is very true and that is all they have ever know but what is our older generation's excuse?

"If you like Bernie, you should move to Cuba or Venezuela.
Socialism = poverty + famine
Bill"

Have you even been to a so called "socialist" nation? May I suggest looking into any of the Scandinavian countries, you know the ones that have the highest standard of living in the world. I've visited Sweden and Denmark every summer for the past 30 years and it's true and I always tell my friends there how good their lives are compared to here.

Meanwhile, Ben and Jerry (of ice cream fame) get arrested.

OMG I think H just swung me to her side - I've been undecided and need to go vote! I like Mikey, very much!

To Bill and others, you only have to, DUH, look north of your border to see a country that IS a "Social Democracy", and has been for over a hundred years. Trying to find the best of both systems, while leaving the worst behind. It's NOT easy, and it is under CONSTANT threat from corporations and (ahem) foreign countries that for some reason HATE governments that try to give their citizens a more equitable place at the table.
It's NOT perfect, but it just might be perfect for YOU.

Is that view north Stuyvesant Town?

"The millennial demographic seems to fully support corporatism and materialism ."

Are you getting the Baby Boomers mixed up with the millennials? I'm not a millennial (squarely Gen X), but they seem to have actually taken notes on the state of play, especially given how the Great Recession retarded their employment prospects.

"Are you getting the Baby Boomers mixed up with the millennials? I'm not a millennial (squarely Gen X), but they seem to have actually taken notes on the state of play, especially given how the Great Recession retarded their employment prospects.
The Baby Boomers, OTOH, ugh..."

Boomers brought corporatism to new heights but I believe it was the young lions (Gen X) that came up with the stock scams which brought our economy to its knees. As a late Boomer I still remember and even voted in against Reagan (TWICE). I belonged to a union and was pissed to watching the Republicans convince most of America that Unions were holding back our economy while unions maintained the middle class. Gen X is the middle child in history right now. Waiting for the last of the boomers to kick it but getting paranoid by headway the pampered Millennials are making in coffee consumption and most likes on Facebook. Gen X is post punk, post new wave, almost post grunge and we are still waiting for a big contribution to the world. ugh....

Mikey just got a huge shout-out from Hillary during her speech tonight! WAY TO GO MIKEY!

LOL @ blaming Generation X for the economic woe and greed of the country and accusing them of having a hand in both.

I was upstairs in my apartment--my building just steps from Mikey Likes It--blissfully ignorant of all the excitement. Literally making GOTV calls for Hillary while SHE was enjoying ice cream with a gigantic crowd down below my window. DRAT! First I knew of it was on the network evening news!

Go Hills! Bring it home for us.