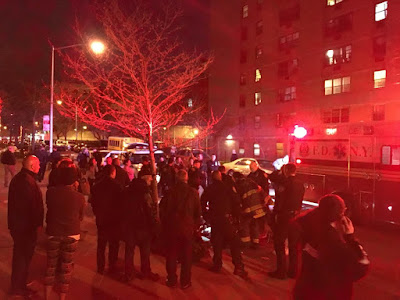 [Photo from last night by DR]

A man was shot and killed last night in front of Pedro Albizu Campos Plaza I on East 12th Street near Avenue C, according to published reports.

As PIX 11 reported, police received a 911 call around 10:44 pm. Elliot Caldwell, 23, had been shot in the back, polices sources said. He died later at Bellevue.

A neighbor told the Daily News that Caldwell grew up in Campos Plaza, and would return to visit.

Police haven't made any arrests and the investigation is ongoing, per PIX 11. CBS New York reported that a witness reported seeing a man in a red hoodie running from the scene.

Back in January, according to a report in the Post, an unnamed 23-year-old man had been shot in the left leg. Police said that the victim, who was trying to leave the scene in a cab, "was uncooperative and refused to give them a description of the suspect."

An NYPD patrol tower (SkyWatch) arrived on the scene shortly after the January shooting. The NYPD had recently removed the tower. 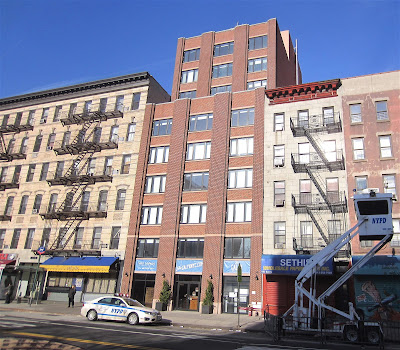 Updated 11:30 a.m.
DNAinfo reports that Caldwell, who lived nearby on 12th Street, had a 3-year-old son. "He was a great father. He changed his life for his son. He just got caught up in a bad situation," his aunt told DANinfo.

This is an active drug gang zone. Unless the police maintain a 24 hour presence the gangsters will take over and more shootings will be inevitable. I'm generally against stop and frisk but there are too many guns and wannabe gangsters in this area. It's time for a major crackdown.

Police are just not good at preventing crime. Why are they paid? To sit in towers for a few months, then vanish? There should have been a regular foot patrol -- oh, yeah, right, they are prohibited from leaving their vehicles -- in and around Campos.

And a police station is four blocks away... Just terrible.

Police don't prevent crime they spot it and respond to it. If you want to prevent crime you back elected officials that support better education for all, higher minimum wages, outreach programs and career training. Most people get involved in crime because there are few to no alternatives to make a living. Every time a prison is built it is a symbol of our failure as a society to take care of our young.

The 9th Precinct Community Council monthly meeting is next Tuesday evening (the 19th) at the Precinct house on 5th Street. It's open to all and I'm sure they will address and take questions on the shooting.

Of course they removed the police tower, as if the problems in this area had all been solved. This is an active drug dropoff area used by a couple of drug gangs in Murray Hill and Chelsea, the cops know it, so why don't they keep the pressure on to stop it?

The gunshot victim was a gang member (Money Boyz) and was charged in the 2013 bust of a cocaine delivery service:

ANDDDD?!!! That was 3 years ago!! If he was doing anything bad he wouldn't have been out of jail. He was affiliated with the people who DID those "crimes". The lower east side is not all what people try to make it look because of the bars and restaurants, there's life outside of that. These are kids who grow up in this area who are mentally abused by the cops because of who they know. He didn't deserve this regardless of his past.

Stfu if you don't wtf are you talking about man.. You out here anonymous trying to snitch and shit.. The kid changed his damn life for his son.. It's called being at the wrong place at the wrong time

honestly I'm surprised the comments are not inflammatory. Seems as though the more Trumpified we are becoming, the tone of public voice has become more shrill, as such, it's a pleasant surprise to read these thoughts. The area is not a 'drug dropoff' anymore than any other gathering spot in the area (I've lived on the south side of 11th B/C since 1979.) And please, this is not the TIME for a major anything, except as 8:52 so ably put it, time for a major push for those fiscal investments-all alternatives to crime. It would be realistic to have more diligent prevention of illegal gun trade. The tv show mentality of the area being a gang anything is ridiculous, but if it keeps those who think it is away, all the better. Can't we rise up for more advantages for those who live here? Instead of scaling back on the Boys Club and other focal points for positivism, let's recognize the possibility that such behavior can be prevented!

It seems the real estate agents selling all the naive newbies on the East Village aren't making them aware that this kind of crime happens here. I have 20something neighbors who walk around the area drunk and vulnerable and one who even leaves her door unlocked. The police will shut this crap down when a frat boy from Connecticut gets caught in the crossfire.

Yeah okay. If you believe that... Well you know the rest.

This is definitely a known drug dropoff area as the arrests a few years ago prove. Anyone who tells you otherwise is either ignorant or just lying because they are trying to cover up what everyone with two eyes already knows is true. The cops need to clean it up before a gang war breaks out and innocent people get caught in the crossfire.

Why don't we wait for the facts to come out before pointing fingers?

And they want to build market rate housing there good luck with that!

Don't hide the identity of the guy who shoots you ... said...

EVG makes an interesting observation that in January an unnamed 23-year-old man had been shot in the left leg. Police said that the victim, who was trying to leave the scene in a cab, "was uncooperative and refused to give them a description of the suspect."

I guess the thought is that it's the same 23-year old man who was just killed. If so, that suggests a different than usual interpretation of the old saw "snitches get stiches". Had that man "snitched" and told NYPD who had shot him in the leg, he might have still been alive today. If it's a different 23-year old man, then he might have removed a gun-wielding assassin from the 'hood, possibly saving Mr. Caldwell's life.

how can your local precinct prevent crime when they put innocent folks in jail for the political and financial gain of your local representatives?

make sure you don't get caught up thinking that you live in a free and just society because that's simply talk and not reality.

As someone said to me just yesterday, yep I know things are rigged so I just follow orders and play the game.

Is that your idea of living in a free society? It sure is not mine. I grew up in what was supposed to be the land of the free and the home of the brave as I became an adult I found it's only the land of the twits and the insane.

It doesn't matter if he was a gang member or not. He was a good person he had friends who loved him and a son who now has to grow up without his dad all because people wanted to play God. You should have some compassion because no one deserves to be MURDERED in the way that he was 😡

A low-cost solution to gun violence in this neighborhood might be to have security people in the projects with metal detectors. Make it impossible to enter these buildings without going through a gun detector.

Keep your negative comments about the victim to yourself

Yet they continue to eliminate Youth Programs that provide options to support systems that advocate for change regardless of your situation. Our people need more preventive support and safe havens that provide opportunities for growth. Provide a safe haven and a place where our youth can get the support of mentors that can steer them in the right direction and referrals to education and skills trainings for employment as an alternative to street opportunities. If this is all they are provided this is all they will reap. Adults need to get more involved in supporting our young people and the governments need to provide more funding to allow for the right support system to be in place. God bless this young man. This is heartbreaking. No one deserves this. His child and family this community deserve better.

It don't matter what type of area it is, the Victim did not deserve to lose his life how he did period and not to some punk who felt the need to sneak up on him and do that to him I hope they catch his immature no life self. please be respectful to his family, friends and especially him about the matter. Drug drop offs are being done in different parts in NYC and?? That's no reason to be nonchalant about what happened to him. Just stop it!!! People change, everyone once in their lives have done stupid things but that gives no right to lose your life like that . R.I.P to him.

People always talking about shit they don't know rt trying to belittle my friend.people make
mistakes they grow and learn from
It,and that what he did for him and his family.I love u bro rt

People talk shit about stuff they kno nothing about smh.it's sad rt trying to belittle my friend about his past!smfh same on u the past is the past ok we grow and learn from the mistakes and bad decision We
Made.but growing from it is what he did for him and his family.smh bro love u and we will keep ur name rocking. Ur big bro A

I didn't know the young man, but I grieve with his son and family and friends. The past is the past and everyone deserves a second chance. RIP.

I have my children in the elementary school in front of the plaza. Sometimes I feel uncomfortable walking on 12th street when groups of young 20ish year old are there, you can feel the tension. It is scary to know that gun violence regularly happen just in font of the school yard.

Violence is visible in places like that Plaza because richer, whiter people with power think that's fine. Most people who live in those buildings are normal, honest people who worry about their kids, make ends meet, and want to have a decent life. Do you think it is the street dealers who own the planes, boats and (yes! believe it or not) submarines that bring in drugs?

Those visible, 'scary' 20-something guys are considered disposable by the scum up the food chain.

Well said and I absolutely agree