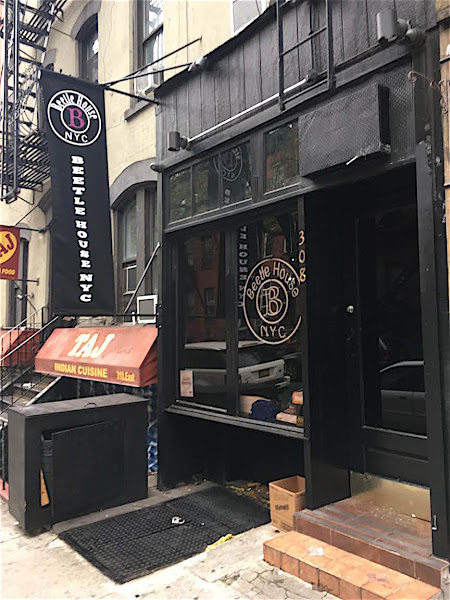 The signage that arrived this week is surprisingly pedestrian for a bar-restaurant "with an atmosphere and menu inspired by the works of Tim Burton."

In fact, the sign looks a little similar to the previous tenant, Confessional, which closed in March... 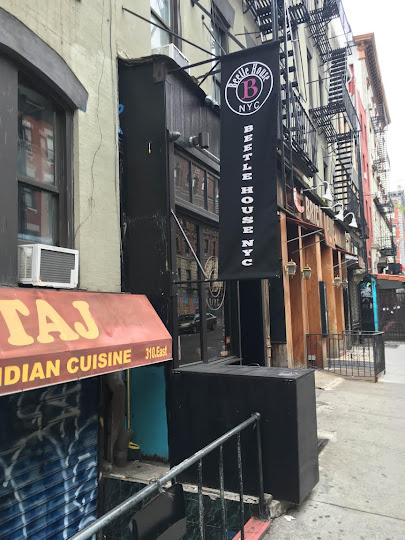 Anyway, people won't be coming for the signage... but the drinks... Such as!

The Chocolate Factory Martini. This is one of our delicious elixirs, hand crafted and mixed to perfection. We believe this one increases libido, relieves stress and satisfies even the sweetest of teeth. #chocolatefactorymartini #beetlehousenyc #beetlehouse #timburtonmovies #willywonka

Bar previews began last night. The official Grand Opening is May 6. (It's cash only until then. And by reservation only?)

Just look for the guy dressed as Beetlejuice out front and you found the place... 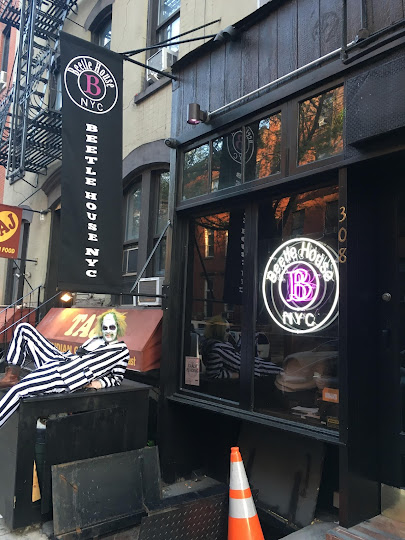 Beetle House is operated by the proprietors behind Stay Classy, the Will Ferrell-themed bar that opened last October on Rivington Street.

What an embarrassment. Lame.

I hope, after the initial interest, the owners take a shellacking. That might serve as a cautionary tale to others who want to open such horror stories.

Why is this not in the *new* Times Square...

Embarrassment or not, if they play the oingo boingo discography on the PA often , ill be there.

nonymous 7:46 said: Why is this not in the *new* Times Square...
exactly what i was going to say, but then we are the new times square - the transformation from neighborhood to zoo is in full swing.

Kidult culture is the familiar, cutesy, pretend badass, safe and perfect for a selfie. Bar's like this one are serving a generation different from what we know, a group of being that don't want anything authentic while the licensed plastic version will do just fine.

Pedestrian because Tim Burton would sue them for using any Beetle Juice imagery to make a profit. I don't see the point of this concept. It's like those band documentaries that aren't allowed to use the bands music so they use generic, "inspired" tracks.

Draw a door and run through it!

And this used to be such a nice safe neighborhood...

You guys are ridiculous - I literally ran into Beetlejuice on my way to dinner last night and stopped in after with my friend to have a drink - we ended up staying for two because of the friendly and exciting atmosphere and funny, silly music. Absolutely nothing wrong with this place- the bartenders, waiters and Beetlejuice himself were super nice and welcoming. A+ service. Lighten up, guys - its not the end of the neighborhood. Its cute and fun, and I hope they stick around long enough to see the return on their investment. P.S. I've lived here for 4 years and think we are extremely far from being anything close to Times Square.

Between this and the hospital-themed bar, the East Village is turning into a dull dystopian Disneyland.

Now if it was the Beetlejuice of Howard Stern fame I'd be all over this place ...

I went there and by the time I left I somehow made $10,000, my goiter was smaller and my parents loved me again! This bar literally changed my life! If you don't go drink there you are PRACTICALLY LOSING MONEY AND YOU WILL PROBABLY DIE!

I remember when Babyland, the store that sold cribs and childrens furniture turned into Babyland, the bar on Ave. A. and then there was Beauty Bar (which is still here, but now a chain. gah). Of course, those places made use of a lot of stuff from the former businesses, but they were still theme bars. just sayin'

11:32 AM
O.M.G why do the owners need to theme the place if it has nice atmosphere and people already?
Because theme places attract people that what a plastic version of a bar.

4 years? Wow! I'm looking forward to your historical tour of the neighborhood. The wealth of information you must be!

"Go ahead, make my millennium!"

Why oh why couldn't it have been Mars Attacks?

I just moved to the East Village like 20 minutes ago, and already this is my new favorite place in the world to hang out and get shitfaced, falling down, blackout drunk. As a matter of fact, the last 5 minutes here have been the best 300 seconds of my life, and it's all on Instagram if you don't believe me. So if you don't like it, then all you haters can just move back to Ohio, because that's where I come from, and believe me, Ohio sucks. #TaylorSwiftIsARealNewYorker

Full disclosure. Stopped by tonight and “Jim” aka Beetlejuice was really nice, we talked the movie and he loved my anti Santa-Con t-shirt (a Trading Places drunken Santa Dan Ackroid eating the salmon on the bus). A warm friendly atmosphere. Upon leaving I shook his hand. Of course he had a joy buzzer. You have been warned. Not at all (at least yet) the shit hole theme park I thought it would be. Still cash only. On an early week day night, could be fun.

I was thinking we need Banksy to do a parody of the East Village as he did of Disneyland. Maybe it's already in progress and this is the first, second, err... xth installation?

(A) Quiet enjoyment is the privilege of tenants in any apartment at any time.

(B) Okay, so perhaps the theme bar is having a moment, and the moment moved downtown. I remember when the Hard Rock Cafe seemed kinda ridiculous too...you know, right after dinosaurs roamed the earth.

(C) Yes, early weeknights are great for most places, when the EV seems like a pleasant, purple shadow of its former self.

(D) Perhaps one of your children will grow up to become a specialist in diseases of the liver. Will facilitate your move to the suburbs?

This is obviously the owners

"Endorsing this place is INSAAAANE."


Hey, what can I say, I had a pleasant experience there. It was relatively Bro/OMG free and there weren’t the usual 15 flat screens where rubes from flyover states scream for their teams. 6 months from now, who knows.

I don't hate change just shitty change. I don't hate bars just bars that all about excessive drinking and the usual aftermath. Change for change sake is not good, change what does not work don't trash stuff just because it's old. You if lucky will be old (older) some day too.

I'm a 46 year old native New Yorker who hates everything. I hate hipsters and I hate yuppies. But I f-ing love Beetlejuice. I have since I saw it in a dirty theater in the Bronx. I'm totally excited. If you've only lived here 4 years, you really have no idea what you're talking about.

I'm hoping for a Blade Runner themed-bar, as it's one of my favorite movies. Or perhaps The African Queen. Everyone sits in their own little boat. You can throw the empty bottles "overboard." Service by "African Natives." Or would it be more fun to order around German Stormtroopers...

You're all mean and hateful, haven't you ever heard if you can't say something nice don't say anything at all. I say give it a shot if its awesome it will flourish and if it's lame it won't. You all need to get over yourselves, ugh

As a former bouncer for most of the bars in the LES, the 70s, 80s & 90s are long gone. Change has come & will continue to come. My wife and I are horror buffs & are looking forward to bringing our children to this place & walking around my old stomping grounds , see what's still there and what has changed. I hope it works.