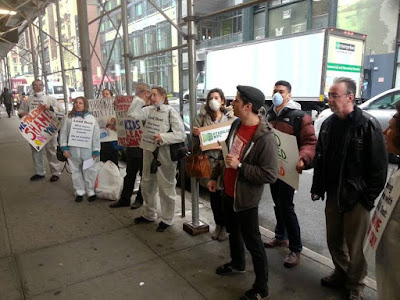 [Image from April 12 via the Toledano Tenants Coalition]

The Toledano Tenants Coalition is gravely concerned about demolition taking place at buildings owned by you, or entities controlled by you.

When you, or entities controlled by you, do demolition work that poses a potential risk of lead exposure to tenants, we demand that:

In addition, we demand you take the following precautions to protect tenants:

• Notify building residents two days in advance of demolition work.
• Post warning signs outside work areas while work’s in progress.
• Clean, clear, and seal off work areas.
• HEPA-vacuum before doing work.
• Cover/seal ALL windows, floors, vents and doorways with plastic and waterproof tape.
• HEPA-vacuum and wet-mop work areas after each day's work.
• Store work materials in sealed containers, or remove them from premises after each day’s work.
• Carefully discard debris, and ensure that no dust or debris is tracked out of work areas.
• Spray plastic barriers with water mist, and safely remove them; fold and seal plastic in plastic bags.

Tenants have been advised that if they don’t believe you’re complying with the law, including the legally mandated demands outlined above, they should call 311, and report your activities to the relevant city agencies, including DOB, HPD, DEP, and DOHMH.

In closing, please don’t use demolition/renovation as a ploy to begin buyout discussions with tenants.


On April 12, several members of the Toledano Tenants Coalition and other activists gathered in front of the Brookhill offices at 298 Fifth Ave. "to fight against eviction efforts and other problems at their buildings," as The Villager reports in its current issue.

A Brookhill spokesperson told The Villager that they dispatched "a professional remediation crew [that] quickly rectified the situation and brought the property into full compliance" upon receiving a notice from the Department of Health.

"We continue with constant monitoring of the property to ensure the health and safety of all of our tenants, which is our primary concern," the spokesperson told The Villager.

However, Coalition members said that the work continues unabated.

Report: Management company sues Raphael Toledano for backing out of $130 million loan
Posted by Grieve at 4:30 AM

These folks are much more gracious than me. I wouldve named the group the Douchebag Toledano Tenants Faction or something similarly rude.

They are a bunch of criminal and should be ashamed for allowing people to live in those poor living conditions. Furthermore, they should be highly dealt with in according to local and state law and guidelines of N.Y.S. Housing laws.
Needless to say, also be penalized for the poor work conditions that they sent myself and and members of my crew into those death trap dungeons.