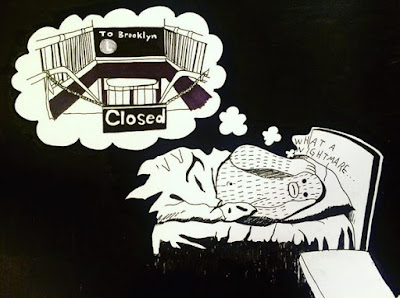 As you probably know, an L train shutdown for Sandy-related repairs will happen in some form or another. But when?

Yesterday, the MTA provided a date: repairs won't start until 2019.

However, the length of the closure is unknown. Per The Wall Street Journal today:

Officials have been weighing options that include closing both tracks running through the century-old tunnel or shutting down one track at a time to maintain some service between Brooklyn and Manhattan.

A full closure of both tracks through the L train tunnel could be completed in about 18 months, but a partial closure could take twice as long and cost more.

And those officials will be collecting comments (and expletives) from commuters and other stakeholders starting next month. The MTA's first public meeting to discuss the upcoming repairs is set for May 5 at the Marcy Avenue Armory, per Curbed.

So anyway, we likely won't be seeing that new L-train entrance on Avenue A until after all this. Say, 2022.

Thanks to Brandon Sines for the use of Frank Ape!
Posted by Grieve at 1:30 PM

"The L Train" is the upcoming spinoff of "The L Word"

I just made that up. But it should happen!

Do you think the EV will see an uptick in music venues as a result of the L train shutdown?

It doesn't matter. Most of the transients who has just moved in now will be out of EV or Brooklyn by 2019: they have moved back to Connecticut or conquered some other neighborhood by then. Those who stay always have the option of the blessed CitiBikes and precious Uber.

Anyways I think it's about time that the EV and Williamsburg call it quits and go their separate ways.

2019??!! By then all the 'cool' people will have concluded their logical metamorphose into yuppies and will be in the 'burbs pushing strollers.

Interesting point anon 3:19. I don't think there will necessary be new venues created (or is 2019 the honey fitz's big chance???) but we'll probably notice an increased concentration of bands choosing more dates this side of the river.

That's so not fair. Many lower income people living in Bushwick (and there are still many left) depend on the L to commute to school and jobs in Manhattan.

I certainly hope there's a somewhat-equivalent bus route or other workaround to make this transition less painful.

Regardless, we will adapt; we always do.

(I'm neither "cool" nor "hip," but I do find myself going to Brooklyn quite a lot.)

3:19 horrible to call people that live somewhere for years transients -- you should be ashamed of yourself no one is impressed you were alive and living here twenty years ago

This is a disaster waiting to happen. I for one, if I am still in NYC during this time, will not be living in Brooklyn. Most of the desirable areas to live are already overpriced and overrated. A majority of the apartments there are just as expensive as Manhattan, perhaps even more. I'd rather stick it out in the EV for now. I often take the L train to the Broadway Junction stop and transfer to the A train to JFK when I have to go out of town. I will miss that one component of the L train. It only takes under 45 minutes. I hope for the sake of the MTA that it won't take that long.