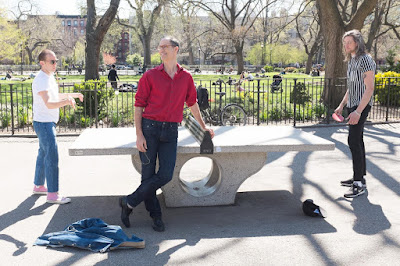 I’m from Munich, Germany, and Ann Arbor, Mich. My mom grew up in Munich and met my dad there. He was a solider. So we started spending summers there and most of the year in Ann Arbor, where he taught in the medical school.

From growing up in Munich and Ann Arbor in the 1960s, there were big differences in the manner of thinking in the two places. One beaten and old, with a rich cultural history but recent hijacking by a tyrant, and a keenly developed propaganda machine, down to the point where people were ratting on each other. The other one a comfortable, conservative landscape around the intellectual, liberal center of Ann Arbor, and there was a particular ferment, politically and socially.

We moved when I was 3 months old. We just started shuttling every summer. My mom had kind of a PTSD from being in the bombings and bomb shelters. There were easier social guidelines for young women, and just a sense of plenty and comfort. The economic boom in Germany had not yet started, but we were very comfortable here in the states, inventing the concept of suburban sprawl development. So it was very difficult to reconcile these two worlds, but that led to an intellectual growth.

I came to New York in 1977. I changed from the University of Michigan to Purchase in dance. I was pre-med in Michigan. Then after three years there I came to the city. I was lucky. I got a place on Stuyvesant Street, and I’ve been in the same home for 37 years. At the time, I was afraid to ride my bike past First Avenue. It’s just like a 22-year-old coming to New York, not knowing what’s going on, trying to learn from instinct what’s safe and what’s not – you’re developing street wisdom.

I used to dance with Merce Cunningham, who is one of the geniuses of any art form of the 20th century. His partner John Cage, the composer, is a little more well-known. The type of dance is modern dance, and that encompasses several things, but Cunningham based his kind of modern dance on Martha Graham’s style, and ballet, with a lot of his own refining. The ballet was an important part of it.

At the time, a lot of money flowed into dance through the National Endowment for the Arts, so those were kind of the glory days of dance. There were strong pillars of modern dance and great separation between the ballet and the modern world. They thought of each other politically as antagonists, where they mustn’t mix, but that was more in the 1950s and 1960s.

In the 1970s when I got there, aside from the entire cultural revolution that was going on pre-AIDS, there was starting to be this mixture of those worlds and a lot of free thinking — kind of a renaissance. You had people after Merce, who were in the Judson movement, who were experimenting in SoHo. There was again a great respect between the various art forms, like Rauschenberg, and other artists mixed with and did productions with choreographers in SoHo.

It was just accepted that you would keep an open mind and experiment. There was a lot of that going on. Keep in mind that the city was not safe, as we’ve defined it today. The parks had a lot of beaten down and hard earth from lack of maintenance. There were many parts of lower Manhattan that were not developed for retail – no hotels, few restaurants.

The East Village was nothing like it is today. The DNA of the East Village and the glory stuff, like the lesbian playwrights and the drug dealers, and the political movements, definitely were alive here. And went way back to 1850 in Tompkins Square Park — they were having demonstration of Suffragettes. I hate to say it and it’s going to sound perverse, but there’s just something about the comfort, ugliness, and the run downness of the city that made people more honest and more here. They weren’t importing some kind of propriety and stiffer ways of being.

I had a very hard dance solo at PS 122 to perform the day or the weekend they ran out of heating oil. The stage there is very hard. I had a great time doing that but developed Plantar Fasciitis from the freezing hard floor. It’s a funny injury that you need one to 12 months, so I said to my company, I’ve got to take a hiatus. In the back of my mind it looked like a swan song.

It was a time of venture capital in New York, of free business advice. People could have any stupid idea, and if you murmured it at a bar somebody would say, I want a joint venture with you. Add to that that there were these programs of free business advice, of good quality that the city setup, through the Small Business Administration.

I kept bringing these cockamamie ideas to them, like vegetable oil for diesels from the soba restaurant around the corner. My advisers were kind of bored, but one day there was this one guy, 75 years old, who was in the fashion industry. He had coke-bottle glasses and eyebrows out to here, and I said to him, I’m kind of thinking of concrete ping-pong tables. I know them in China and Europe because I lived and taught over there, but I don’t see any here and I can’t find any on the web.

And he stopped what he was doing and looked into the distance and said, ‘Ping pong, I remember ping pong.’ And the complexion in his face changed and his eyes watered a little bit. This was a sincere response, even a physical one.

Next week, Alan talks about his company and ping pong in Tompkins Square Park.

I'm already hooked on this story. Can't wait for next week!

You need to post a better pic of Alan because he is one sexy dude, fyi!

Great interview, especially the part about that old fashioned thing called honesty, and how people today are importing their own sense of propriety and stiffer ways of being. Another term for that is uptight pretentiousness.

Request for next weeks photo: a dance pose on the ping pong table.

Thank you, Alan Good. This is the most accurate, non-romanticized description I've seen of the hood in the 70's. I moved to EV in '74, with my then girlfriend, who also became part of the vibrant NYC modern dance scene. I was a young actor/musician (now an old actor), and instantly fell in love with the community of folks who came to create and experience art, living in harmony with open and accepting locals, occasional dangerous encounters aside. It was not pretentious and certainly not expensive. I understand that things change, but am certainly grateful to have experienced the energy, joy and spirit of that East Village.

As a now longtime resident of the EV 35 years in August, I agree coming here was like finding a library filled with stories you had never read before. Everyone I met was fascinating and a most more street smart if not smarter than I was. People were involved in cool shit and although living was hard with very little money, it was possible. There is a lot I don't miss about the early 1980's like being robbed and burglarized, and the drugs, ugh... I am glad I was young, adaptable, curious and resilient, you had to be that or there was not point in living here.

"...there’s just something about the comfort, ugliness, and the run downness of the city that made people more honest and more here" - oh my God I could not agree more. People think I'm nuts when I tell them I prefer the East Village the way it was when I moved to 11th and B (right around the same time Herr Good came in), with its small Polish and Ukrainian bars and restaurants, interesting mix of stores and services, dirty, abandoned, collapsing buildings, range of people and ethnicities, empty sidewalks and streets thanks to lack of pedestrians and traffic (and also, oh yeah, a lack of much noise). Yes there were drug dealers on my block 24/7 but I never had a problem with them, they knew I lived there and was not a client; they never failed to greet me as I walked by them, and they actually looked out for me. I knew the names of the proprietors of the small stores I frequented, since they owned as well as worked them, and we would often wave to each other as I went by. It really WAS a little village, and those of us who lived here, whether we knew each other or not, shared the understanding that we were all members of the same crazy little "family" for voluntarily coming to, and establishing ourselves, in a post-apocalyptic-looking neighborhood like the EV was in those days. There are still lingering remnants of it, but each week more and more of them get stripped away - thank God for keepers of memory like Mr. Good and his like, who can recall what truly great places both NYC and the EV were before they got boring - all cleaned up, prettified, and suburbanized for the benefit of a bunch of yahoos who would not have set foot in them in the "bad" old days.

Alan is great, he welcomes people into his ping pong tournament and games with open arms. Neighborhood is lucky to have him... Three cheers for Alan!

This guy is very cool and I say that because I've spoken to him many times. I too moved here in 1977 and continue to live on my same block. I totally recognize his description of the old EV. I drove a yellow taxi at that time and any fare east of 1st meant a drug buy. Walking east from Bowery to the park around 8.30 in the a.m. meant meeting none save those who had spent the night outdoors.
"We're not in the East Village anymore"
I'm glad to see that EVGrievers recognize that.