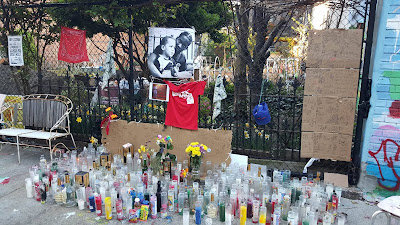 The NYPD has reportedly arrested and charged a man in the shooting death last Thursday night outside Campos Plaza on 12th Street near Avenue C.

ABC 7 reports that Theodore Holloway, 23, of Manhattan, has been charged with second degree murder in the death of Elliot Caldwell, 23.

Caldwell, who lived nearby on 12th Street, had a 3-year-old son. "He was a great father. He changed his life for his son. He just got caught up in a bad situation," his aunt told DNAinfo.

Police have yet to release a motive for the shooting.

DNAinfo has more details. According to their report, Holloway, who fired from the backseat of a parked car, "has been arrested 11 times before, most recently for robbery and assault."

not the first time that a shooting has occurred

at this location.there is something illegal going

on in this vicinity.

Whenever i read things like this I think of the speech red gives at his parol board hearing in the film shawshank redemption.

These stupid kids think they are being all big and tough and keeping this tough guy image is all that matters... Yet, sadly they won't won't know what it cost them till it's too late.

My heart goes out to this young man's family and friends. Their mourning is not diminished by the fact that this is not the first time something like this has happened at that location. And I pray that justice will be done.

More outreach and attention to problems at Compos Plaza and other locations in the surrounding area of alphabet city. How can we help our neighbors.

It's so sad that a young man had to die this way. It's ridiculous how these guys are killing each other and I feel bad for the residents over there who have to live in fear of being shot. We need to get guns out of his neighborhood.

i also feel more than a little sad for the kid who shot him if that makes any sense at all. there are no winners here it seems. very, very sad. xo

When are they gonna ban the NRA so I can feel safe in my nabe?

The guy that was arrested for the shooting,that's my baby brother.so I'm hurting just like the victims family....My heart goes out to my brother and that's all....

I love my brother, whom they arrested and I hope he pull through...