Openings: Desi Galli on Avenue B 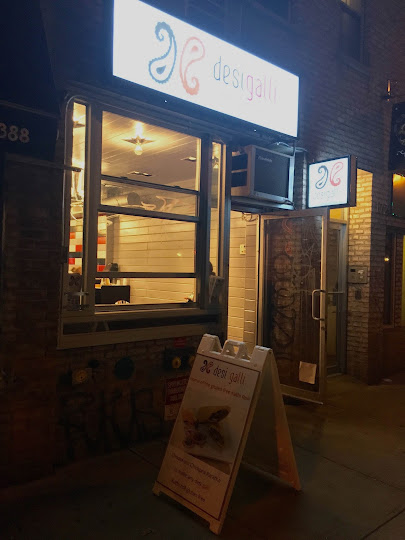 As previously reported, the proprietors of the well-regarded Desi Galli on Lexington Avenue and East 27th Street were opening a location at 172 Avenue B between 10th Street and 11th Street (the old Mercadito Cantina space).

Anyway, Desi Galli, which offers quick-serve Indian food, opened this past Wednesday (a few days later than previously announced) ... and they are open late (or early depending on your schedule) ...

Open until 3am in the #eastvillage. #midnightsnack

The food I've had so far is delicious and pretty reasonable, price wise, the staff are friendly, they have numerous veggie options, and best of all, they have rasmallai, my fave Indian dessert. Score!

Already been here twice! Their food is reasonably priced and delicious. So far I've tried the poutine, different but good, and the paneer aloo wrap. Mmmm roti.

I will have to try it. Sounds good. Veggie options..yes.
Melanie
East Village Corner

I tried the lamb curry today. Cooked to order and very tasty. Homestyle. Not at all greasy. I didn't love the rice. Was it basmati? Not cheap, but reasonable, as others have said. And the owner is not aloof.

Yummy food with a cafeteria style vibe. I love that they're going to be open late because my favorite Indian joints close early.

I'm so happy to welcome this great quick and tasty place to the block. Great prices, great food, friendly staff. Glad it's a bit spicy too! There are too many pricy places on Ave B, so glad this isn't one of them.

I had the paneer tika roll with a samosa which weredelicious. They have a daily special which includes a tika roll, a samosa and a drink, and overall the prices are reasonable. Their sauces are spicy and delicious . The food is made to order and so its hot and fresh. This place should do well.