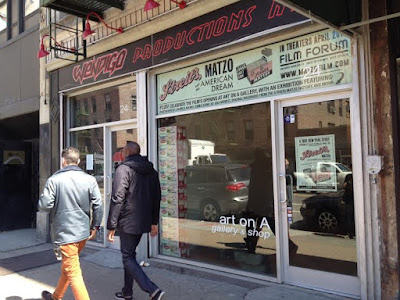 When we exchanged emails with filmmaker Michael Levine the other day, the East Village resident had just lugged 1,200 pounds of matzo-making machinery and 800 pounds of matzo to Avenue A from Rockland County.

Levine's documentary, "Streit’s: Matzo and the American Dream," which explores the history of the family-owned matzo factory on the Lower East Side, debuts next Wednesday at the Film Forum.

Ahead of that, Art on A Gallery, 24 Avenue A between East Second Street and East Third Street, will feature an exhibit on Streit's starting tonight. (Levine shared the photos in this post while setting up the exhibit yesterday.)

"We'll have archival photos of the Rivington Street factory from the 1920s-1950s on display," Levine said. "We'll also have a photo series from 2015, just before the factory closed, by Joseph O. Holmes."

Other exhibit highlights include:

• Work by Judi Harvest, an artist who has been creating gold-leafed matzo since 2000. She's creating a wall of special pink-gold matzos in honor of Streit's.

• Archival video projected on the rear wall of the gallery, shot at the Streit's factory in the 1940s. 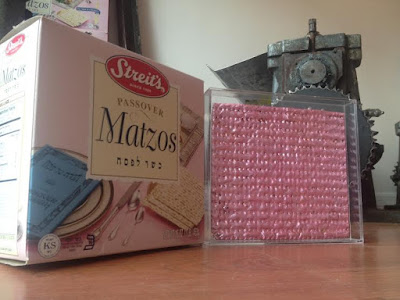 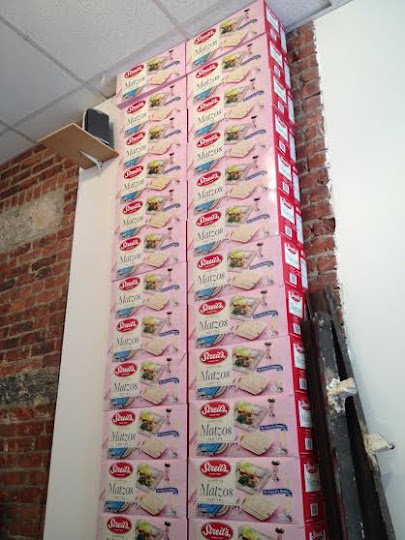 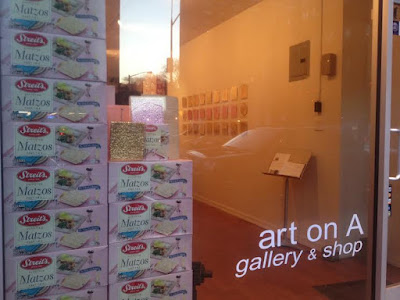 "I had this idea when I thought about the fact that this would be the first Passover in a century without Streit's having some kind of physical presence in the neighborhood," Levine said. "There are so many people who would make their annual pilgrimage to the factory, and while I couldn't give them that, I wanted there to be some place for them to go and get in the holiday spirit, as it were. Streit's didn't sponsor any of this in any way — nor did they have any financial/editorial say in the film — but they're excited about the idea."

The four buildings that housed Streit's, vacated last year, are set to be demolished next week to make way condos.

"The idea of those buildings coming down, and maybe even more so what will replace them, makes me sick to my stomach," he said, "but I suppose if it has to happen, maybe [the film and gallery show] might provide a little more perspective than usual on the significance of that loss." (As Alan M. Adler, a great-grandson of Aron Streit, the business’s founder, told the Times in January 2015: "[T]he reality is that operating a modern factory in four old buildings has finally caught up with us.')

The opening is tonight from 8-10. (The exhibit will be up through May 5.) Members of the Streit family as well as several of the factory workers will be at the gallery tonight.

The documentary plays the Film Forum April 20-26. You may find tickets here.

Email ThisBlogThis!Share to TwitterShare to FacebookShare to Pinterest
Labels: Art on A Gallery, Streit's

I want one of those hats!!!

Does anyone know if this was the last factory (of any kind) in Manhattan? I can't think of any others.

Hi there - it's Michael, the director of the film here.

Googla, as far as I know it was the largest factory left in Manhattan - still a few garment manufacturers here and there I suppose, and there was Blatt Billiards until last year as well. Maybe someone else knows if there's any larger ones still around? I can't think of any others either.

The matzos were good, as were the other food samples, including the chocolate. Didn't see EVG there. Some interesting conversations about LES culture and history, including the Streit matzo factory.