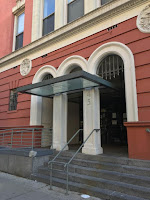 More headlines about the controversial sale of the former Rivington House on the Lower East Side.

The attorney general’s office signed off on the sale of the property in October 2014, not knowing the buyer, Allure Group, was going to push the city to lift the deed restriction that required the property to be operated as a nursing home, an official said.

The Allure Group turned around then and sold the property to a developer for $116 million.

Meanwhile, the Post reports that "panicked officials at the highest levels" of Mayor de Blasio's administration were working to undo the deal they made to life the deed restriction for 45 Rivington St., the former Rivington Center for Nursing & Rehabilitation.

On Feb. 24, Deputy Mayor Alicia Glen’s chief of staff frantically offered a $16.1 million refund to The Allure Group, which had paid the fee to get a deed restriction lifted on the property at 45 Rivington St. The deed change allowed Allure to sell the property to a luxury-condo ­developer for $116 million.

In return for the refund, Allure was told, the city sought a long-term care facility or affordable housing, according to a source close to the negotiations and evidence reviewed by The Post.

And The Wall Street Journal takes a look at the previously little-known municipal agency that wields "vast power."

The Department of Citywide Administrative Services oversaw the deed modification, which allowed the Allure Group to sell the building for a $72 million profit. The Journal names the senior official within the Department who approved the modification.

Also, per the Journal:

At the time of the deed modification, the department’s commissioner was Stacey Cumberbatch, who was appointed by Mr. de Blasio in 2014. She resigned in January. No reason was given for her departure, and she moved to an administrative job with the public hospital system NYC Health + Hospitals.

Previously
Posted by Grieve at 1:30 PM

Glad to see they're making moves to reverse this bullshit. So sick of luxury condos. Even if I lived in one.

Just goes to show how endemic corruption is in the city. And how real estate/ financial interests overwhelm even well meaning politicians.

Pigs at the trough. Oink

They better reverse this. Absolutely ridiculous of the city or one person to mess up this badly. She "resigned" and then got a job at a public hospital? Are you kidding me?

Normally when you make a $72 million mistake you don't still have a job. Maybe it wasn't a mistake...

There is a process called "Eminent Domain" where the city can take the property for its fair market value. In this case the LEGAL fair market value is $16m. That would go a long way to deter crooked developers who could never be sure the land would not be taken back from them.

I know that developers are evil in lots of cases but the city messed up here, can't blame the developers for taking advantage of such a huge mistake

The "City" did not "mess up!" A cadre of corrupt officials altered the land records for their own personal gain or the gain of their patron Mayor deBlahs. Balancing the equities whether the people of the City of New York should suffer or the developer...the balance favors the people of the City of New York who are the victims of the initial fraud. (Good Lord, when is Cuomo simply going to remove him?!). Let the developer get his money back from whomever be bought the land from.