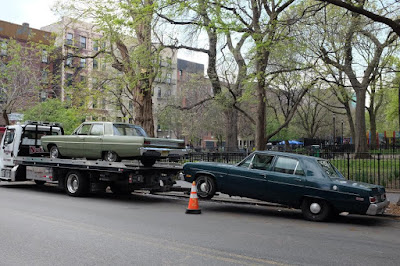 Crews were out today along Avenue B and Seventh Street for "Barry," the story of a college-aged Barack Obama "trying to find his way in 1981 New York City." 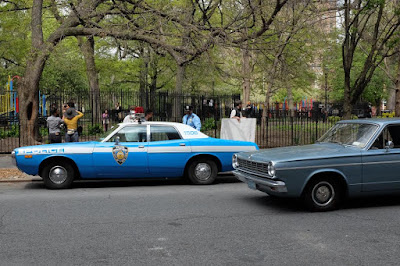 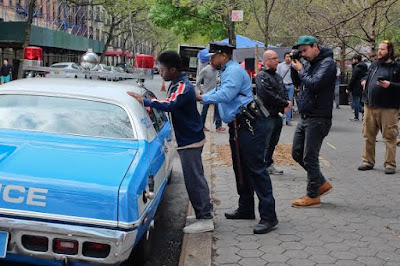 Per the Hollywood trades, newcomer Devon Terrell has the lead. The independent drama is being directed by Vikram Gandhi, a Vice correspondent who made the documentary "Kumare."

EVG reader Charlie Chen shares a few more photo of the police cruiser when it was parked on East 10th Street waiting for filming... 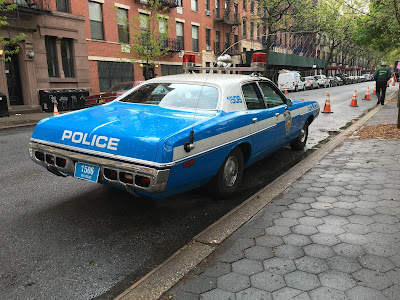 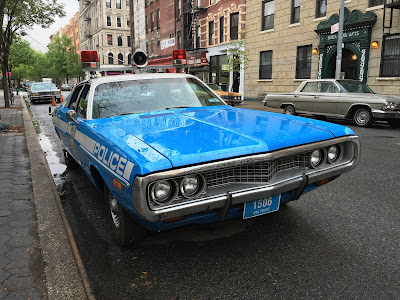 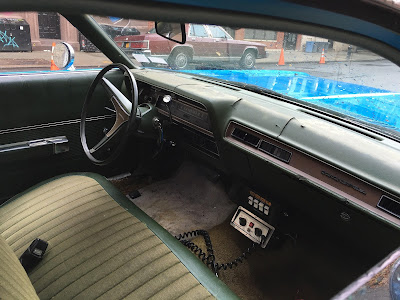 "Barry?" A better title would be "Straight Outta' Obama."

Give me a fucking break.

I'm sorry, if a movie is to be made about this man, the greatest U.S. President after FDR when you consider all he has been up against, it should be a movie put out 1. after Obama is out of office 2. a three hour movie with an all star cast including a preeminent black actor and directed by a preeminent black director (Spike Lee, John Singleton, Lee Daniels, Antoine Fuqua, etc.) and 3. a movie encompassing his life through his entire presidential career. It should be grand and big like Malcolm X which showed MX's entire life, not just his early days as a street hustler.

Also, "Barry" is disrespectful. His name is Barack.

Looks like a green Dodge Dart and a blue Ford Falcon…they don't make 'em like they used to.

Now THAT is a cool police vehicle. Bring back real cars!

"Also, "Barry" is disrespectful. His name is Barack. " I'm not certain what his friends called him back then but maybe "Barry" was one of many nicknames.

The POTUS is only half black so perhaps you be settle for a director that is half white half black?

Wrong. First of all, Barack Obama used to be called Barry. Go read a book. On Obama's early life. He wrote one himself. And B) you don't get to decide how other people make their movies. This is America, you can always go make your own movie how you see fit.

Greatest President since FDR? Lmao, then it would be a comedy

Hey 10:21am, 11:29pm here. First off, his name is Barack. His father gave him that name. That's the name on his birth certificate Trump deep down still insists isn't valid. Second, right, HE, Barack Obama, called himself "Barry", he can do that, because it's him, he can call himself whatever he wants. Some filmmaker who doesn't know much less never met him calling him "Barry" is disrespectful and inappropriate. He is no longer "Barry", he is President Barack Obama. Last I'll say whoever should make a movie about Barack Obama whenever and wherever I fucking feel like it okay? Yes, this is America and I can always do that (make my own movie how I see fit), thanks for telling me two things I already knew. I also know I can have chocolate ice cream at 3:43am, knit a sweater etc.

He is the first black U.S. President, 8:42am (wiseass), so just stop. Perhaps you can get a clue and realize he has always identified himself as a black man.

Comedy 10:33am? No, fact. Affordable healthcare act providing its namesake for millions of Americans. Killed Osama Bin Laden. Is doing the best he can cleaning up the mess the President before him made. Has done these things and more under the highest scrutiny and in the face of the most hatred towards a U.S. President, hatred mostly from him being black. Btw THIRTEEN attacks on U.S. Embassies with 60 people killed in them under Bush. Deal with that, Trumpling/Luzer/Kasucker.

Maybe read his first book (or both of them). It isn't that long of a book.

Maybe I'll do whatever I feel like including speak my mind. Too bad if you don't like it.