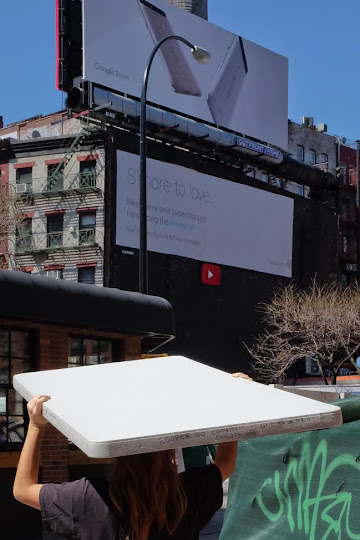 [Smartphone falls off billboard on the Bowery? Photo by Derek Berg]

A talk with Cochise and Clayton Patterson, co-authors of "The Street Gangs of the Lower East Side" (Bedford + Bowery)

Prince at the Roxy in 1981 (Dangerous Minds)

About the first show at the International Center of Photography, opening soon on the Bowery (The Lo-Down)

A move for the Pickle Guys (BoweryBoogie)

On Sunday: The romantic-comedy "The Square Root of Zero" (1963) "pits a pair of Village beatniks against a clan of moneyed squares vacationing on the Maine coast." (Anthology Film Archives)

Some presidential history of the Church of the Ascension, on Fifth Avenue and 10th Street (Ephemeral New York)

...and Peter Missing has put up new work this past week at First Street Green Art Park ... Find more on it at Jeremiah's Vanishing New York ...