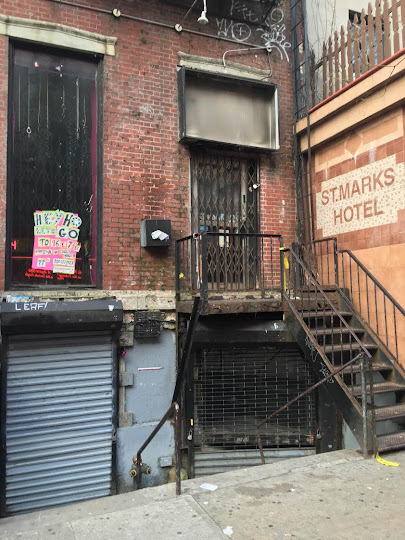 4 St. Mark's Place, the landmarked building whose first owner in 1833 was Alexander Hamilton’s son, has a new owner.

The building between Second Avenue and Third Avenue arrived on the market last fall for $11.9 million.

Since then, the longtime commercial tenant here, Trash & Vaudeville, moved to 96 E. Seventh St. in March. The four free-market apartments on the floors above are apparently tenant-free now as well. (Which might explain this.)

The Commercial Observer (H/T Curbed!) had the news of the deal:

Since it has no tenants, “it is in effect a blank canvas, offering the buyer a unique opportunity to renovate the building and realize a tremendous amount of upside,” Eastern Consolidated’s Ron Solarz...


No word just yet on who the buyer is. (The deal hasn't hit public records yet.) Trash & Vaudeville owner Ray Goodman was a minority partner in the ownership of the building.

Also known as the Hamilton-Holly House, 4 St. Mark’s Place was built in 1831 and designated a New York City landmark in 2004. Col. Alexander Hamilton Jr. bought the townhouse in 1833 and shared it with his wife, Eliza, his widowed mother, Elizabeth Schuyler Hamilton, her daughter Eliza Hamilton Holly, and son-in-law Sidney. Sidney and Eliza went on to open the first bong shop (just for minced tobacco) on the block.

Soon after, Sidney and Eliza with a Z closed for six months to refinish their floors and perfect their vaping technique!

$10M strikes me as rather low for a historic building on the busiest stretch of St. Marks, no? Any RE experts care to weigh in?

ps I realize it is ridiculous to call 10 large "rather low," but c'mon, we live in a stupid-expensive real estate bubble

They called it a 'blank canvas and unique opportunity to renovate' That is code for you will spend millions to redo this old dump before you can cash in. Historic is a bad RE term. Prob needs a gut renovation or close to it.

Low because they may limited as to how they can mame it.

Interesting that the T&V owner owned the building. Why move then? Obviously there's reasons but seems like it's more comforting and longevity smart to stay where you own the building.

If T&V owned the building, then ya gots ta move to be able to sell it and cash in on your investment.

As I understand it, an LLC was the owner of the building, with the T&V owner serving as a minority partner in that corporation. So a smaller share of the profit from the sale. And why not? Given how much the taxes are on this, plus maintenance of a landmarked building

No surprise here. This corner is about to undergo a major construction project....in fact two projects, and we are not even discussing the big mess of the ongoing Astor Place / Cooper Square construction for the last two years. The adjacent building housing the Pizza and Bagel store and the St. Marks Hotel is going to either be torn down or a new building is going to be built on top of it. What a mess that will be for anyone who buys this building or for any tenants who might buy or rent in it as well. The noise and dust will be horrendous. Across the street on the north corner, three buildings were sold and again there are plans to tear them down as well. So this little EV corner which had charm and history is about to be a demolition site for years to come.
Couldn't get me to live there. Not even for free...really.

The city has the power to either allow over-development of this historic corner or dis-allow it by way of restrictive zoning and landmarking protection. Guess which route the city has taken? Guess how much the right parties were paid off in order to allow this to happen??