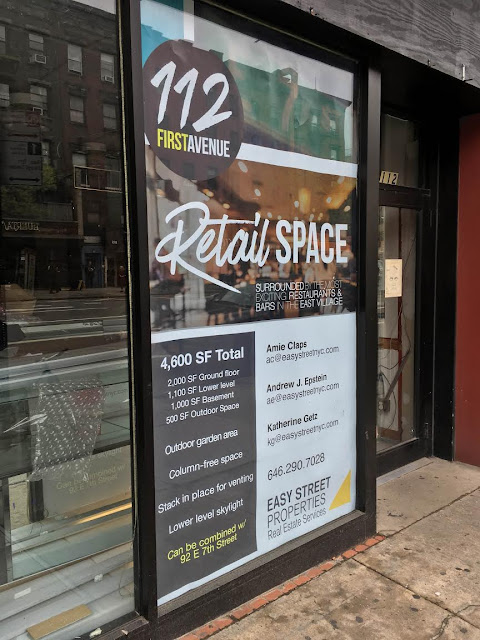 Ricky's closed in March here at 112 First Ave. between Seventh Street and Sixth Street, as we first reported.

The for rent signs have now arrived. Per the ad in the window, the space is "surrounded by the most exciting restaurants & bars in the East Village." (Not sure if the brokers know that this address shares the block with a Subway, McDonald's and Dunkin' Donuts. But there are nice restaurants nearby. And bars. The Coal Yard! The International!)

The 112 storefront can be combined with 92 E. Seventh St. around the corner... 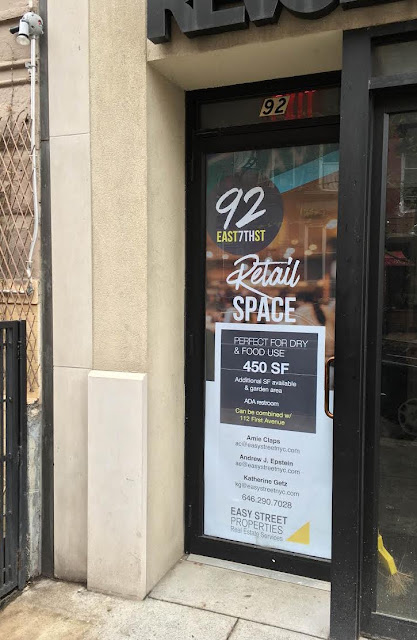 This was the Revolver Salon space attached to Ricky's. (They left last year.) This space is being pitched "for dry & food use." There's mention of a garden area too.

Before Ricky's, the space was home to Miracle Grill, which closed in 2007. The restaurant's garden space was where the residential building is now at 92 E. Seventh St. So there's still a garden back there somewhere.

The signage just arrived on the storefronts... so the listings are not live as of this moment at the Easy Street Properties website. So we don't know what the asking rent is. Yet.

The Ricky's on 1st Avenue has apparently closed
Posted by Grieve at 4:20 AM