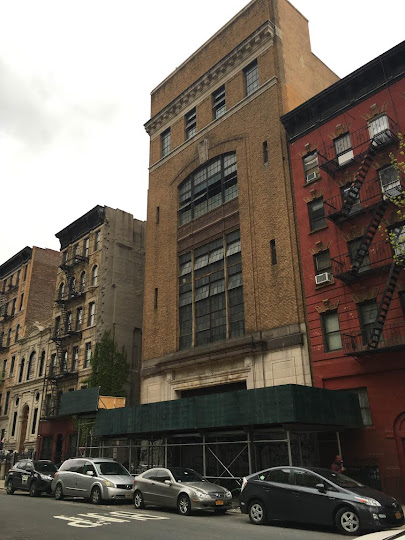 The sidewalk bridge arrived this week here outside 421 E. Sixth St. between Avenue A and First Avenue.

As previously reported, the building is expected to be a gallery space to display new owner Peter Brant's personal art collection. The intention is to have two shows per year. The first one was said to be scheduled for this fall. Not sure if that's still on track. We haven't heard much, if anything, about plans for the building since Brant's reps filed permits for renovations last summer.

There has been some signs of work in the vacant space to the west of the building that's part of No. 421's property... 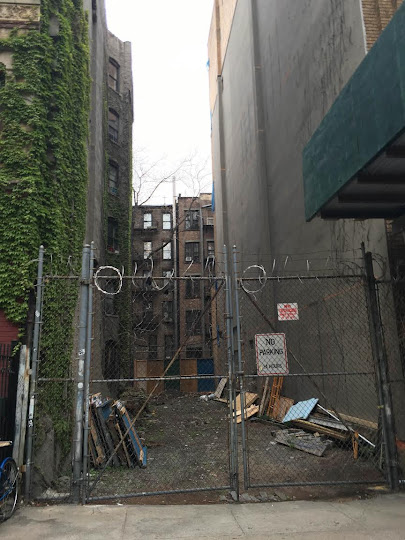 According to previous plans for the place, the empty side lot will feature a garden space... 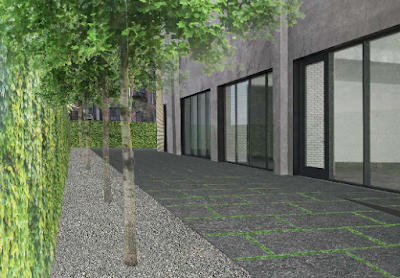 A new work permit was filed yesterday for the open space, though the job is in hub self-service at the DOB website and can't be viewed until it's accepted.

Peter Brant meets the neighbors
Posted by Grieve at 4:15 AM

it's pretty much standard that you can't see plans for a building until they are accepted by DOB. that way neighbors have little time to complain about what will be on their block.
if you really care you can go to DOB early in the morning and maybe get to the plan manager that is reviewing the plans. don't count on it.

Nice garden. Where are the fucking benches?

I used to live right next door to De Maria's building, and I was always fascinated with the little brick and stone wall with what seems like a window arch in the alleyway being discussed. I tried to look into the history of the building that the wall is attached to (417 East 6th) but couldn't find much in my prelimonary search.

I've always wondered how old the wall was, and what it was originally used for as you can see through the archway what appears to be a basement or lower level of some sort running along the side of the building...

Anyone have any idea what it was? I figure it's going to be destroyed when they build this boring plaza/park and I'm afraid I'm running out of time...

@12:32 - I always wondered about that little arch as well - could it be a fireplace?