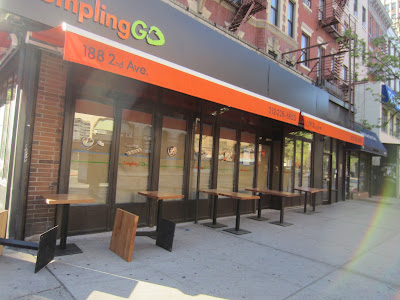 DumplingGo is entering its third week of closure on Second Avenue at East 12th Street ... and there still isn't any "temporarily closed for renovations" sign on the door for customers ... the phone goes unanswered and their website is down.

However, as we previously noted, there is a freshly approved permit for a "minor renovation of the existing restaurant" on file with the city. And we looked in the window where there wasn't any paper ... and saw a fairly disheveled-looking interior... 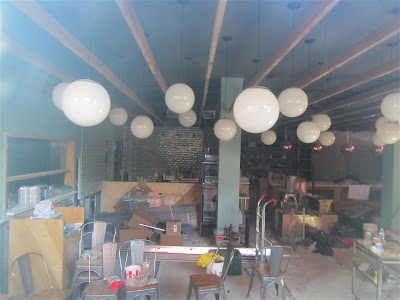 Can't really tell what's happening... aside from the workers are getting KFC to go... 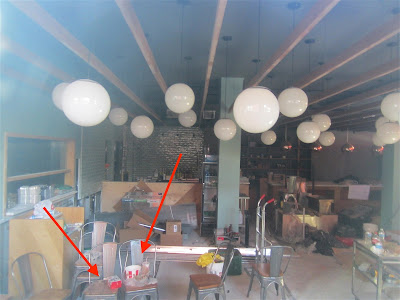 Anyway! According to a message on Yelp, the quick-serve restaurant is expected to reopen on May 28...

The DumplingGo team was getting the OK this month from CB3 for a beer-wine license. (Suppose they could just turn it into a bar with a "small bites" menu.)

DumplingGo opened 13 months ago. After Shima closed here in early 2014, the asking rent for the storefront was just over $25k.
Posted by Grieve at 4:00 AM

Perhaps, when the workmen are finished here, they can go lend a hand peeling potatoes over at Empire Biscuit so that carb emporium can re-open om schedule in March - of 2018.

Who is going to go have a beer at a place called DumplingGo? Really? There are so many great bars in the area. It's the last place I would go for a drink let alone dumplings. The dumplings were awful. They tasted like plastic.

DumplingGo was garbage. The dumplings taste exactly like the precooked ones you could get at Trader Joe's. Vanessa or Prosperity are much better choices. Also, stay away from gentrified Mimi Cheng's dumplings.

To have a beloved restaurant you need passion. This place ain't got it. There doesn't seem to be actual people behind this it. Just some faceless, soulless restaurant group. Good riddance.

@9:59: "GENTRIFIED dumplings"?? Can you provide a definition for that?

Mimi Cheng's dumplings are great & so is their service. That's called knowing how to run a successful business.